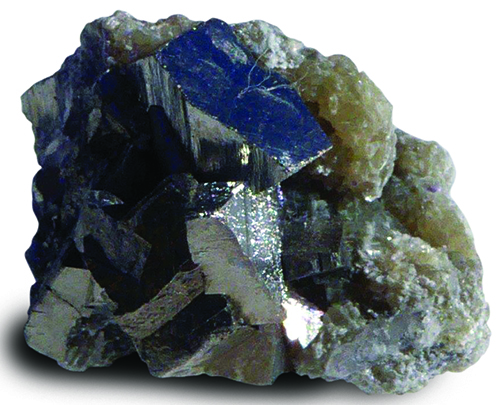 A prime example is arsenopyrite, or iron arsenide sulfide (FeAsS), sometimes called arsenical pyrite. This mineral is composed of 46% arsenic, which is a notorious poison. German geologists used to call it mispickel. The evil “Miss Pickle” develops as well-formed monoclinic, somewhat orthorhombic crystals. These crystals are often striated on their faces and frequently twinned, yet, they can also form in massive, columnar, or granular masses.

When freshly plucked from a vein deep within a mine, all forms of this mineral usually are silvery-white (also described as “tin white” or light steel gray), but they then oxidize (tarnish) to iridescent shades of pink, brown, or copper. Arsenopyrite is related to pyrite and marcasite. However, its silver color easily distinguishes it from its golden-yellow cousins. This mineral is opaque with a metallic luster, and it leaves a streak ranging from gray to black on a ceramic streak plate.

If heated or struck, arsenopyrite releases a garlic-like smell and may also show magnetic properties. However, I don’t suggest conducting such tests because that garlic-like smell is arsenic, and any fumes released are toxic. This fact has led some to warn about collecting this particular metal, but you would have to breathe in large amounts of such fumes to prove fatal. Still, why take the chance? 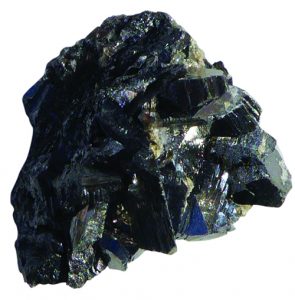 Did You Know: Arsenopyrite is the most common of the arsenic minerals, and it is a major ore of arsenic.

While arsenic has a reputation as a deadly poison, arsenic compounds are also used to treat various diseases, for instance, amoebic dysentery. Many of its medical applications were replaced by the discovery and development of penicillin in the late 1920s. But as an economic mineral, arsenopyrite may be rich in other associated minerals of value, including gold, silver, and cobalt. Arsenopyrite often forms within sulfide (sulphide) deposits in high-temperature hydrothermal veins, pegmatites, and some contact metamorphic rocks.

As noted, miners sometimes find gold associated with it, which makes it valued for more than its arsenic content. In addition to gold, it is often associated with chalcopyrite, which is a source of copper.

Before adding specimens from any of these localities to a collection, it’s best to grill the mineral dealer about the identity and keep skin contact with the mineral to a minimum. Experts suggest storing arsenopyrite in a sealed, dry container at low to moderate temperatures.

Advice Worth Heeding: Whether a mineral with a known toxic component or not, one source I consulted wisely noted, “always treat any mineral specimens with care.”