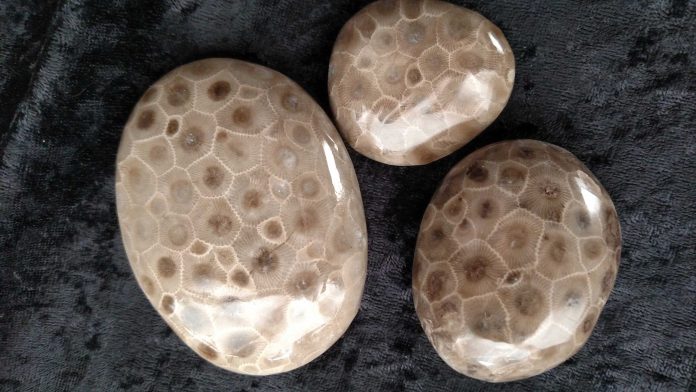 What are Petoskey stones? To paleontologists, this coral truly does not become a “Petoskey Stone” until someone slices and polishes it (and charges people lots of money for it). Then it becomes a Petoskey Stone. In its rough natural form, it is really a piece of Hexagonaria coral.

Walking along the northern Lower Peninsula shorelines of Lake Huron and Lake Michigan, it is easy to see this fossil’s natural attraction on people. Looking into the water, one can sometimes see this coral, rounded by relentless waves, worn smooth showing its beautiful internal structure. It is easy to see that rockhounds, jewelry makers and almost everyone would be taken by this attractive fossil.

Once removed from the water, however, it quickly dries and loses its bright polished shine. To achieve that permanent shine, it is necessary to polish the rock by grinding and sanding it and finishing it with a polishing compound to bring out the beautiful luster of the stone.

Petoskey stones are fossilized corals. There are at least nine species of Hexagonaria, but the only true Petoskey Stone is the H. percarinata. These corals are marine organisms that are made up of many, sometimes thousands of hard calcium carbonate exoskeletons called corallites. Each corallite contains a polyp – an individual multi-cellular animal.

There are two major types of corals - solitary corals growing by themselves, and colonial corals, growing in a tight community of genetically identical polyps. The polyp is the actual living individual creature that inhabits each corallite. As the coral grows, it extends the calcium carbonate exoskeleton and seals off part of the base.

Corals live in a symbiotic relationship with a variety of marine algae. Although corals have stinging tentacles and are able to capture food such as zooplankton, the algae provide the energy corals need to survive.

Food is captured by tentacles and brought down to the center where the mouth and stomach are located. The algae use a process called photosynthesis to provide additional energy to the coral polyp. In turn, the hard calcium carbonate exoskeleton of the coral and stinging tentacles provide protection for the algae.

The coral polyp produces waste products that the algae needs for its survival. Because sunlight is needed for the algae's photosynthesis processes and sunlight only penetrates the ocean to a certain depth, corals normally grow in shallow waters from 30 to 150 feet.

Hexagonaria coral is a colonial marine animal that lived in warm shallow salt-water tropical seas. Prehistoric Michigan was once such an environment. During the Devonian Period some 419 -358 million years ago, Michigan was located much closer to the equator.

Much of Michigan’s bedrock is made up of huge limestone beds that underlie the surface soil. These large tracts of limestone bedrock are the remains of ancient coral reefs that filled the sea that once covered what is now Michigan. Ancient coral seas were full of a variety of creatures that included but were not limited to, corals -both solitary and colonial.

Each corallite of the Hexagonaria is made of a sometimes five but usually six-sided compartment which adjoined the others in the colony and created the elaborate six-sided hexagon. The radiating lines one sees in the Petoskey Stone are the septa and theca. The septa are the lines of division between each corallite and the theca are the internal radiating lines. These patterns of hexagon shapes and radiating lines are what will gives the Petoskey Stone its uniqueness among rocks.

The Hexagonaria are found across Michigan along lakeshores and rivers in the sediments commonly called the Traverse group. They are rounded fragments of the coral Hexagonaria. Some of these coral reefs still lie beneath the ground and some under the water of Little Traverse Bay.

Because of the wave and abrasive action of the sand, these stones are rounded and washed up on the beach. The action of ice moving also brings these stones into shallow water. The best time to hunt for Petoskey stones is in the spring as soon as the ice melts. But beware, it is a cold time to search! I have seen locals donning dry suits and walking in waist-deep water as ice floats by and picking up the stones before they even reach the shore.

How Did Petoskey Stones Get Their Name?

The name Petoskey is said to come from an old Odawa Indian legend. It is said that a French fur trader, Antoine Carre, came to Michigan traveling extensively in the area now known as Petoskey where he met and married an Odawa princess. In time, he was adopted by the local Odawa tribe and eventually was made their chief.

It is further told that in the spring of 1787 traveling with his wife on his way from near present-day Chicago, he camped near what is now Kalamazoo. During the night, his wife gave birth to a son. Legend says that as the morning sun rose, the sun’s rays fell upon the infant’s face, and his father pronounced his name shall be Petosegay. The translation of the Odawa Petosegay means sunbeam or rising sun or rays of dawn.

Petosegay became a fur trader like his father and also became quite wealthy. He owned much land in the Petoskey area, and a community was settled on the shores of Little Traverse Bay. The present location of the city of Petoskey stands as a tribute to Petosegay. Because these rounded and water-tumbled fossils were found in great abundance on the shores of Little Traverse Bay, they became known as Petoskey stones.

The Petoskey stone was made the state stone of Michigan by legislative action. Then-Governor George Romney signed House Bill 2297 in 1965. This legislation elevated this fossil to the prestigious position it now holds around the world. For visitors to the Great Lakes, a Petoskey stone find is often a must-do!

This story about what are Petoskey stones appeared in the September 2021 issue of Rock & Gem magazine. Click here to subscribe! Story by Joseph "Paleo Joe" Kchodl.