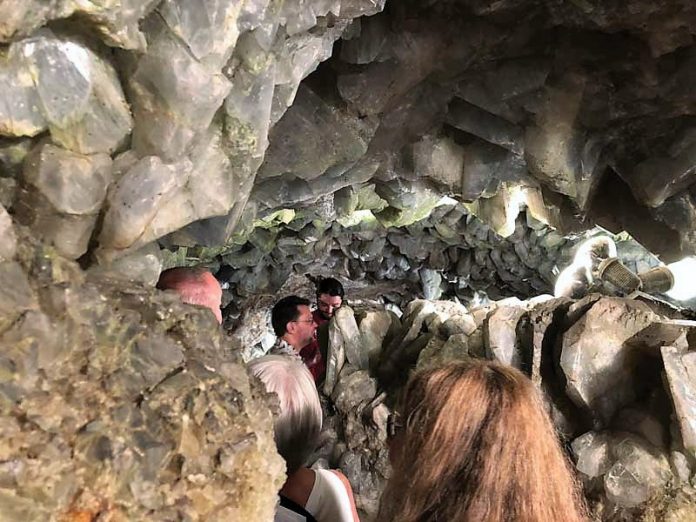 Exploring the crystal cave in Ohio on Put-In-Bay island and the glacial grooves on Kelleys Island are must-do activities when visiting the area.

I was visiting family in Ohio, and they told me of a crystal cave up North located at a winery. The crystal cave is on Put-In-Bay Island in Lake Erie, where Paul Bunyan could have easily skipped a rock across the water border into Canada. A ferryboat over to the island takes vehicular traffic as well as walk-ons, and if you are going for the day, I highly recommend walking. Parking lots on the mainland and golf carts available for rent on the island make this an easy option.

History of the Crystal Cave

The crystal cave is at the Heineman’s Winery. Fortunately, it turns out that the wine-sipping part of the program comes after the cave and winery tours. In 1897, the winery owners were digging a well and broke through the top of a cave lined entirely with whiteish-blue crystals. They thought they had struck it rich, but they found strontium sulfate crystals, also known as celestite. They mined some of the cave’s interior to sell the material as an ingredient in fireworks but soon realized that the cave’s greatest value was a tourist attraction. During Prohibition, tours of the cave helped prevent the winery from going out of business.

The winery’s origins date to 1888 with founder German immigrant Gustav Heineman. The winery has been in the family since. They produce over 20 varieties of red, white, and dessert wines from local grapes. During our visit, upon entering the winery, we signed up for the next cave and winery tour, and the cost of $8 included the cave tour, winery tour, and a glass of wine or grape juice in the tasting room afterward.

As we assembled for the tour, 20 of us lined up to walk down a long flight of stairs into the cave, which is 40 feet below ground. Our group just filled the main chamber, and all were careful not to touch the sides. The delicate mineral growths in the cave cannot take being rubbed by endless groups of tourists.

While we made our way through the cave, I found myself on the edge of the main group in a side tunnel that circles back to the base of the stairs. I walked through this tunnel to get behind the group, and as they exited through the tunnel, I was able to take pictures that would show the cave and not a tight pack of 20 tourists.

The winery owners call the cave the largest Celestine geode in the world, and tours are offered from May through September. This tour is a wonderful experience for anyone who is able to walk downstairs and through a crystal-lined cave. After the cave tour, we toured through the winery, learned about the process and then went to the tasting room. I enjoyed their wine and went home with a bottle of their dessert ice wine. It is made from grapes picked after the winter frosts have set in, making a very sweet sipping wine.

We left Put-In-Bay, made the ferry crossing back to the mainland, and headed to the next ferry. This ferry took us to Kelleys Island, another Lake Erie Island barely south of the Canadian border. The goal of this excursion was to spend a couple of nights camping at Kelleys Island State Park. We had no idea we would end up having such a great time rockhounding throughout this island.

We had read about the Pleistocene glacial grooves at the state park, the largest in the world, so we walked from our campsite to the closest of the grooves that still exist. Several large limestone quarries exist on the island, and some of the glacial grooves were destroyed by limestone mining. The groove at the park was only partially visible until the 1970s when it was excavated, fenced off from foot traffic, and an informative trail built to encircle it. This trail includes an area accessible to wheelchairs. The information posted at the groove tells how the glaciers slowly moving over the landscape ground the grooves into the limestone.

As I was looking at the surface of the groove, it looked to me to have been formed by flowing liquids, not rocks embedded in the bottom of a glacier grinding away at the limestone. Why was it such a deep groove? Why were the grooves flowing into each other instead of parallel grinding marks that I have seen from other glaciers? However, that is what the interpretive signs said, so I didn’t argue with the signs.

Later, when I met with the State Park Manager, Chris Ashley, he told me of another proposed theory, and it makes much more sense to me. Streams of high-pressure water have been observed shooting out of the base of glaciers. The weight of the glacier can create water that becomes liquid at temperatures lower than freezing. When this trapped water escapes the glacier, it shoots out at great speed, carrying with it the debris picked up by the glacier. I liken it to the water jet cutters used by steel and stone cutters, only loaded with rocks and sand for extra scouring power.

When looking at the groove’s interior, the water flow patterns fit this glacial groove-making theory better than the old grinding concept. I hope that any new interpretive signs will add this new theory.

Another discovery we made is that the limestone in this location is loaded with fossils from the Devonian Sea. As we walked around the groove trail, the rocks we walked on were pockmarked with coral, snails and other ocean fossils. Back at the park office, we were informed that any fossils that are loose are legal to keep. Leave your rock pick in your car, though, because it is not legal to mine fossils from the rocks, but you won’t mind because there are plenty of loose rocks containing fossils to pick up.

Crystals, Wine, and Fossils, Too

Fossils here include corals, brachiopods, gastropods, pelecypods, cephalopods, crinoids, and stomato-poroids, 18 different types of marine fossils. I wanted to find one of the nautilus-type shell fossils, so we went over to the large quarry on the island’s southern side. I had my nautilus shell within half an hour. The fossil I found was a little one, three inches in diameter, but nautilus fossils a foot in diameter have been found on the island.

The Park Manager also showed me a less common stone from Kelleys Island, which is tillite. This type of glacial erratic rock came down from a Gondwanan deposit north of Lake Huron. It is an approximately 2.5 billion-year-old stone formed when granite was broken up and later encased in a glacial till that formed into rock. I tried to find one but was unable.

One last stop on our tour of Kelleys Island was the art gallery of Charles Herndon at 110 Laylin Lane. For over 30 years, Herndon was an art professor at Columbus College of Art and Design, and his stone sculpture gallery is outdoors and indoors. The gallery also features paintings and photographs, and much of his stone has come from Kelleys Island. A stone carver myself, I greatly admired his skill and sense of design with rock. The gallery is open to the public, and you shouldn’t miss it.

This story about exploring the crystal cave in Ohio appeared in the April 2021 issue of Rock & Gem magazine. Click here to subscribe! Story by Bruce McKay.