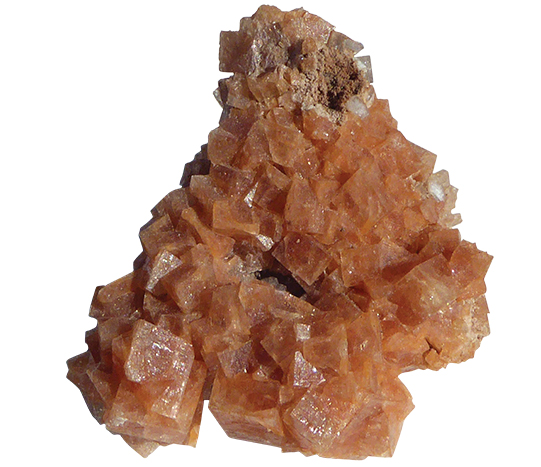 Chabazite (sodium calcium aluminosilicate hydrate) has translucent cube-like pseudo-rhombohedral crystals that often are penetration-twinned and that may be colorless, white, or shades of yellow, pinkish-red (“flesh-colored”), or green.

In addition to larger, visible crystals, it may grow in granular or massive forms. Its luster is vitreous, and—whether the external color is yellow, pink or green--the streak on an unglazed porcelain streak plate is colorless. It appears in several varieties that may be rich in different elements, i.e., chabazite-NA (sodium), -K (potassium), and -SR (strontium). The name itself is from the Greek word chabazios, meaning “stone” or “hailstone”.

Chabazite most often forms in low-temperature hydrothermal veins and cavities in such igneous rocks as basalt and andesite along with associated minerals like calcite, dolomite, and other zeolites like harmotome, phillipsite, heulandite, and scolecite. More rarely, it forms in limestone and in some forms of schist. 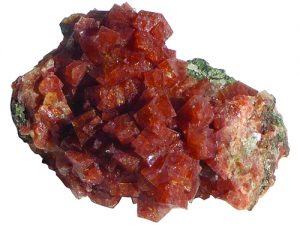 Chabazite falls within a larger group of economically useful minerals called zeolites. Zeolites have open crystal structures that permit small molecules to pass through while blocking large molecules. They take up and release water and readily exchange various elements. These characteristics make them useful for such jobs as filtering, drying, and water softening. Chabazite is also used as an acid-resistant absorbent in natural gas production and to remove heavy metals from waste streams.

Earth Science in the News: Seeking the Building Blocks of Earth