In the April issue of Rock & Gem, I wrote of a magnitude 7.7 earthquake in the South Pacific that set off tsunami warnings across New Zealand and elsewhere on February 10, 2021. As big as that quake was, it was apparently only the beginning of what would soon be described as one of the “biggest earthquakes to hit the South Pacific in modern history” at the intersection of the Pacific and Australian tectonic plates.

Within an eight-hour period on March 4, three powerful earthquakes were recorded in the same off-shore region not far from New Zealand. Two were recorded at magnitude 7.4 and 7.3, but the largest clocked in at an astronomical magnitude 8.1! Said geologist Jennifer Eccles (Univesity of Auckland), “This is about as big as it gets.”

The quakes were centered 13 miles underground near the Kermadec Islands, between Tonga and the North Island of New Zealand, or approximately 620 miles northeast of New Zealand. “Hope everyone is ok out there,” New Zealand Prime Minister Jacinda Ardern wrote on Facebook.

Coastline residents were ordered to evacuate in anticipation of a tsumani as large waves were observed in offshore waters. Residents were told to flee by foot, bicycle, moped, or other means rather than car in fear of a major highway back-up that could put thousands at risk. By one means or another, several northern coast towns immediately emptied out as sirens wailed and thousand of people fled to high ground.

Fortunately, while folks reported seeing “receding and churning” waters along the coast, unusual water colors, and aquatic birds acting “very strange,” the worst fears did not materialize. Even so, government officials continued to warn the public to avoid beaches and shorelines and noted that “people have done the right things in the region by picking up, packing up, and by-and-large staying calm.”

Said Hawaii Governor David Ige, “This is a good reminder to stay vigilant and be prepared.” Good words to heed for anyone residing in a coastal zone susceptible to earthquakes and tsunamis, like my own hometown of Ventura, California, where tsunami warning signs are posted all along the coast and up and down town. 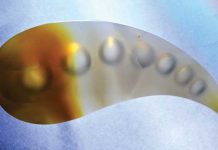