Just when did life first bloom on Earth? That’s a question paleontologists have grappled with ever since paleontology was established as a formal science. The problem? Earliest life would have been microbial, and microbes seldom fossilize.

Still, under the right conditions, even single-celled organisms can leave a mark in rocks millions and billions of years old. But then, so can so-called “biomorphs.” Biomorphs are crystalline structures produced by inorganic or abiotic chemical processes that can look for all the world like spherical microfossils, especially in ancient rocks that have been heated, squeezed, and otherwise ill-treated by earth processes over the course of two or three billion years.

In a recent online issue of the journal Geology, researchers including Julie Cosmidis (University of Oxford) and Chrstine Nims (University of Michigan) warn that many microscopic structures in rocks dating back two to three billion years may not be fossils, as some studies have suggested. Rather, they are likely “pseudofossils,” or mineralogical forms that mimic the shape of biological spheres, tubes, and filaments. How to separate out biological forms from inorganic crystalline forms? That’s the dilemma facing those who would study truly ancient life.

This dilemma involves not just the search for ancient life on Earth but also the search for markers of life on our neighboring planet, Mars. When a robotic rover uncovers a sample of Martian rock with structures resembling cells, can we say with certainty they are proof of fossilized life—or simply a bubble burped up from an ancient chemical reaction?

Jim began and oversees the AFMS Badge Program for kids, has been inducted into the National Rockhound & Lapidary Hall of Fame within their Education Category.
Contact him at jbraceth@roadrunner.com.

How Stalactites and Stalagmites Form in Caves 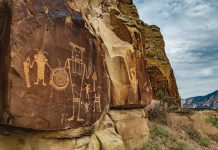