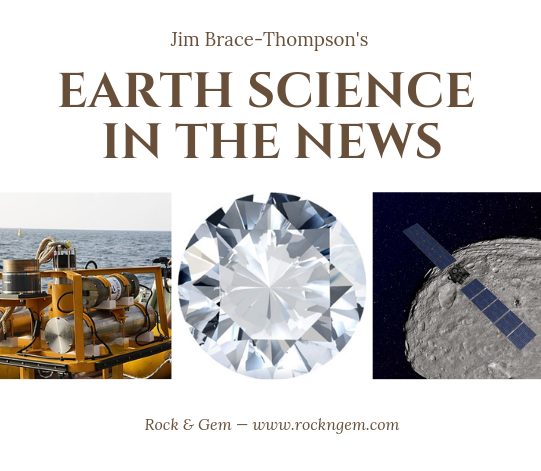 Tsunami Detectors Not Always Up to the Task?

Despite the presence of state-of-the-art tsunami detectors as part of a national alert system provided by Germany, the United States, and other nations, residents of Palu, Indonesia, still were caught off-guard during the devastating and deadly tsunami triggered by a 7.5-magnitude earthquake on September 28, 2018.

The warning system, in place since 2011, consists of seismometers and tide gauges. Within five minutes of the earthquake, the system predicted waves of as much of 3 meters, which should have automatically triggered shoreline evacuations. The actual waves were as high as 6 meters (nearly 20 feet), and Palu residents apparently received no forewarning at all. Authorities are investigating what went wrong and why.

One Million Carats of Diamonds a Year
Minus the Blood, Sweat and Tears

Diamonds always have required sweat to be extracted from the hard rock of the earth or to be screened from alluvial deposits. They’ve also been bathed in tears and in blood, for instance, as so-called “blood diamonds” that have been sold on black markets to fund arms sales and guerilla warfare, in Africa with rare and expensive diamonds often dug by slave labor.

Fortunately, the day is at hand when diamonds will be relatively affordable and easy to come by, minus the blood, sweat and tears!

Per a report in the November 26 issue of Time magazine, a new technique from a company called The Diamond Foundry has proven effective in creating lab-grown diamonds in a hydro-powered plasma reactor located in Wenatchee, Washington.

The resulting diamonds are said to be of high quality, with potential for as many as 1 million carats to be produced annually, thus marking the first time that quality diamonds for the jewelry market might be delivered at a cost-effective scale using guilt-free man-made processes.

A Sad End to a Proud History of
Asteroid Exploration

Per the October 19, 2018, issue of the journal Science, we soon will lose a key eye-in-the-sky as NASA’s Dawn spacecraft runs out of fuel in its ion thrusters. Dawn was launched in 2007 on a mission that has sent back a wealth of information about Vesta and Ceres, the largest members of our solar system’s asteroid belt that circles the sun between Mars and Jupiter. Dawn spent a year exploring egg-shaped Vesta in 2011, then moved on to spherical Ceres in 2015.

In its initial explorations, Dawn discovered that Vesta is much like the rocky planets of our inner solar system (Mercury, Venus, Earth, and Mars) with an iron core and rocky surface. Dawn also confirmed, based on chemical compositions, that many meteorites found on Earth are chips-off-the-old-Vesta, so to speak.

Ceres, with its relatively large size and spherical shape, has been called a “dwarf

planet”, and Dawn revealed that it may have once harbored a frozen ocean and may have formed far beyond Jupiter and Saturn and only later was drawn closer to the sun. This conclusion was made due to the detection of volatile ammonia, which would have been burnt away had the asteroid formed in its present location.

Dawn also revealed Ceres to be geologically active, with “cryovolcanoes” that spew out briny waters rich in organic molecules that are also more common in the outer solar system. (A cryo- or ice-volcano spews out volatile substances like water, ammonia, and methane, as compared to volcanoes on earth that spew out molten rock.)

Currently still in orbit around Ceres, Dawn ultimately will be pulled down and will crash into the asteroid’s surface, perhaps within the next 50 years. Meanwhile, it will circle the dwarf planet like a little moon sent from Earth.

Mammoths in Mexico and Meteorites for Midwinter