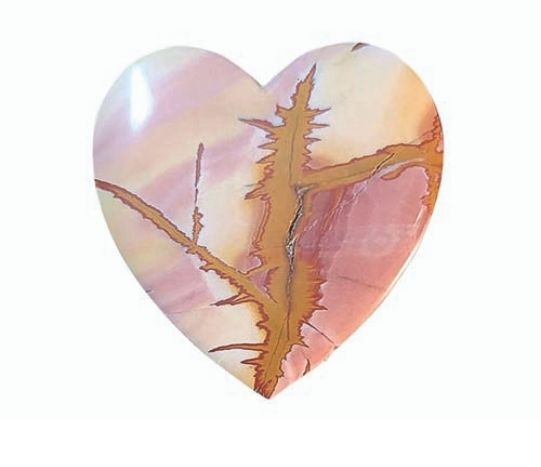 Red Falcon jasper from the Dead Camel Mountain range of Northern Nevada is one of Philip Stephenson’s many stones. Shortly after Philip discovered Dead Camel jasper, he came across another porcelain-type picture jasper that resembles some of the old Owyhee jaspers.

The jasper material’s background matrix colors are mostly yellow, pink, and white. One may see some similarities to wonderstone, but there’s no mistaking its trademark plumes, which often appear to be flowering or have a lightning-strike type of design. This material is amazing to cut, and unlike some of Owyhee jaspers, where most of the pattern’s circumference the outer edges, Red Falcon patterns run through the entire stone. The pattern’s extensiveness helps avoid losing much of the pattern while slabbing further inward of the rough, which happens with some of the Owyhee jaspers. 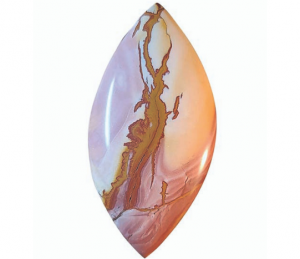 Slabbing Red Falcon jasper is fairly easy. Usually, at least one side shows an appealing pattern to start making cuts. You’ll quickly discover it also will slightly continue to change with each slab cut. Sometimes with the smaller pieces, I like to lightly grind off the edge on each side to see if one pattern is better than another. That is one way I decide the side on which I start to cut.

Sizes of this type of jasper vary, and I like to pick up several smaller-sized pieces rather than a single large piece. This method will ensure I gain the opportunity to cut slabs with all kinds of patterns, yielding a larger assortment. Cutting smaller-size half-pound pieces, I tend to use a water-fed 10” trim saw, cut by hand, and do not use the vice. This technique saves time in that I do not have to turn the stone at a different angle if the pattern doesn’t yield a preferred cut the first time. Red Falcon is a hard jasper, so patience is needed when slabbing.

Once I’m ready to cab, the fun begins! As I stated, Red Falcon is a hard porcelain-type jasper, but it cuts nicely. This material is solid, even hardness through and through, without soft or porous spots.

Over the years, I have tried many different grit wheels to determine which works best on each material type. As for porcelain-type jaspers, I have found that starting on an 80 grit steel wheel to begin the preform process before moving on to a 60 grit soft diamond resin wheel works best. The 80 grit will shape nicely, but the 60 will actually smooth it out and remove material quickly without all the deep scratches and flat spots a steel wheel generally makes.

Since I use a 60 grit soft resin, instead of going directly to a 280, I added a 140 soft resin to remove scratches quickly. I realize most don’t have these in their general setup. If it’s affordable for you or your lapidary club, you will see a huge difference in making cabs with harder-type jaspers such as this material. 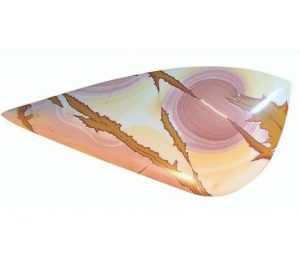 One final tip — once you reach the 14k grit wheel, this should give you a beautiful mirror polish to where you shouldn’t have to go any further. With some jaspers, I like to use a bit of cerium oxide to gain a slightly additional polish. With porcelain-type jaspers, I would hold off using polishing compounds, as the heat might lead to unwanted fractures. The 14k grit wheel should leave you with more than enough of a nicely finished product.

This What to Cut column about red falcon jasper previously appeared in Rock & Gem magazine. Click here to subscribe! Story and photos by Russ Kaniuth.