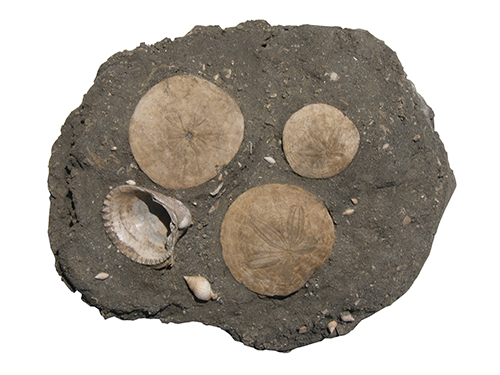 Fossil sand dollars are a fabulous find for beachcombers and fossil hunters alike! They belong to the phylum Echinodermata, which includes marine animals like starfish, sea cucumbers, crinoids and sea urchins. One thing all hold in common is five-fold symmetry, as illustrated by the five-rayed star atop a sand dollar.

What beachcombers find is the test or skeleton, which is made up of interlocked plates. In life, these tests are studded with short spines that, in turn, are covered with small, hairlike structures called cilia, which make living sand dollars look fuzzy.

In the history of life, sand dollars are young. Their close relatives, the sea urchins, have a long fossil record. For instance, my collection of ocean fossils includes 300 million-year-old spiny sea urchins. In the Age of Dinosaurs, during the Mesozoic Era, sea urchins became especially common. Sand dollar ancestors began diverging from other echinoids during this time. However, it wasn’t until 65 million years ago that true sand dollars appeared, during the Paleocene, or the first epoch of the “Age of Mammals” in the Cenozoic Era.

Sand dollars have done well, with 250 living species. Their rigid tests, their tendency to live in large colonies and to burrow into sandy or muddy seafloors are all perfect for fossilization. Where you find one fossil sand dollar, you tend to find hundreds!