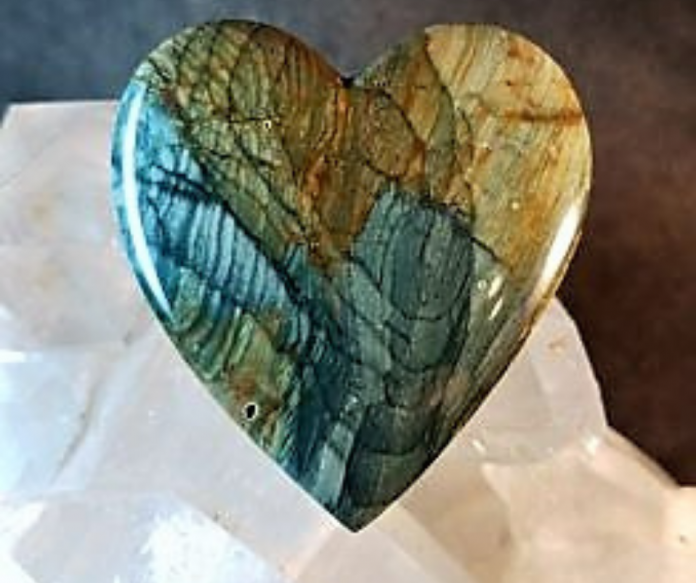 Gary Green jasper, also known as Larsonite, is a petrified bogwood found in the McDermott area on the Nevada/Oregon border. Its bright colors and patterns make this a unique material.

The majority of the material is usually green and blue but also contains various other colors such as pinks, oranges and browns. The patterns resemble cut limbs, but you can also find this material with orb/egg patterns, such as Blue Mountain, Morrisonite and Royal Imperial jaspers. 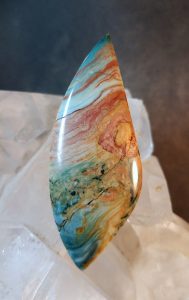 Gary Green jasper is now being mined by West Coast Gemstone Mining Company, and being sold at the Polka Dot agate mine and at the Caldera Rock Shop in McDermott. You can also obtain this material from Aaron Buell on Facebook, he’s the one pulling it directly out of the ground with the excavator every day! Thanks to the ongoing efforts by West Coast Mining for purchasing the land, and mining this material, it will continue to be available to all. Most petrified woods contain fractures and soft edges, and Gary Green jasper is no different, however, most of the newer material being mined seems to be very solid with very few issues of fractures.

When starting out the slabbing process, most people generally cut the short ends of the stone, which is a good place to start, where it displays most of its best patterns. Much of the material is white on the outside, so sometimes it might be best to cut windows on a couple of sides to see which side has a pattern that is more desirable. This material does contain various vugs and pits, but most lapidaries will incorporate it in their work keeping the natural look of the stone. You can work around these areas as there will be plenty of room in your slabs to preform a cabochon without any blemishes at all.

Once you have drawn out your patterns on the slabs and are ready to trim them out, this might be a good time to do a fracture test just to be sure it won’t split on you when you
start to cab. You can do this by trying to flex the slab in your hands or do the drop test, by dropping it flat on your wench bench from 4 to 6 inches up. If that doesn’t split it, it should be ok to start trimming.

Gary Green is a relatively hard jasper, so starting out I use either a 60 or 80 grit wheel to shape and form my cabochon. With materials like this, I like to add a 180 grit steel wheel to my set up, and then switch my 220 steel wheel to a 220 Nova soft resin wheel. By doing this it smooth’s out much quicker and removes the majority of scratches before reaching the 280 grit stage. the rest of the cabbing process is relatively easy and routine, and once you’ve reached the 14k grit stage, you should have obtained a beautifully high polished cabochon. 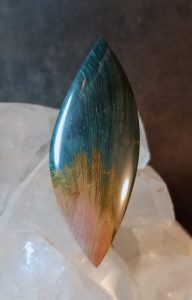 Since Gary Green jasper may contain some surface fractures running along with the wood grain pattern, and/or small pits, I would not suggest polishing with cerium oxide, instead finishing up at the 14k grit stage should leave you very happy with a finished product, or you can go one step further by using a 50k grit soft resin wheel to try and gain just a touch more shine!

This What to Cut column about Gary Green jasper previously appeared in Rock & Gem magazine. Click here to subscribe. Story by Russ Kaniuth.