As is often the case within the mineralogical universe, there is a lot of meaning related to names and naming conventions. It stands to reason this is the case, as it is the identity of an object and will remain in perpetuity, right? Yes and no.

The meaning of the word apophyllite is actually a combination of the Greek words “apo,” which means to be off, and “phyllos,” which means leaf. Together it means to flake apart like a leaf, which is what occurs when apophyllite is heated and there is a significant loss of water within the composition.

This member of the silicate class of minerals and phyllosilicates subclass was initially identified as a single mineral. In the instance of phyllosilicates, the atoms of phyllosilicates bond in leaf or sheets. Then in 1978 things changed for apophyllite when it was reassigned as two separate minerals.

Both of these are similar in physical presentation and chemical structure. Just three years later, the duo became a trio when natroapophyllite, which is a sodium (NA) and fluorine compound, was added to the group. Perhaps this is an example of a mineralogical marriage or formation of a group.

In any event, as of 1981 what was once deemed a singular entity had morphed into the apophyllite group. In the 21st century, the apophyllite group has undergone a couple more changes related to nomenclature, as explained in the article “Tidying Up Mineral Names: An IMA-CNMNC Scheme for Suffixes, Hyphens, and Diacritical Marks,” by Ernst A.J. Burke, appearing in the Mineralogical Record.

The change resulted in a renaming of the minerals in the group by the International Mineralogical Association. This was done to create greater efficiency in cataloging and alphabetical indexing.

Within the apophllyite group the most common and abundant representative is apophyllite-(KF), followed by apophyllite-(KOH), according to information at www.mineralgalleries.com and www.minerals.net. Both present as white or colorless, with apophyllite-(KF) also appearing in shades of green, yellow, and on occasion, violet. In addition, of the three, only specimens of apophyllite-(KF) have reported instances of fluorescence. Although Apophyllite-(NaF) is also reported to appear colorless, it’s more commonly viewed in a brown or brownish yellow color.

To learn more about the cause of color in minerals, revisit the August 2018 issue of Rock & Gem to enjoy an article by Editor Bob Jones. Enjoy the article>>>

In addition to a striking luster, specimens of apophyllite most often form two versions of crystals. The most prevalent is a four-sided pyramid shape known as a tetragonal dipyramid. It appears as a rectangular-shaped prism with the four-sided pyramid at the top, while the other variation is block-shaped (pseudocubic) with unique corners in the shape of triangles.

Given the various regions in the world where discoveries of apophyllite

specimens have been reported, it’s understandable the level of appreciation this group of minerals receives, and the affordability with which it is purchased.

Among the more well-known and prolific modern sources of apophyllite is the Deccan Traps of west-central India; Centerville, Virginia; and traps in New Jersey and in China. Additional locales known for producing apophyllite in the past include the Harz Mountains, Germany; Sampo Mine, Takahashi Okayama, Honshu, Japan; Collinward, Northern Ireland; and Isle of Sky, Scotland, according to www.mineralgalleries.com.

Whether apophyllite’s name represents a singular mineral or a group of three or sometimes four (Carletonite is a bit of an “honorary” member), it certainly seems to fit. 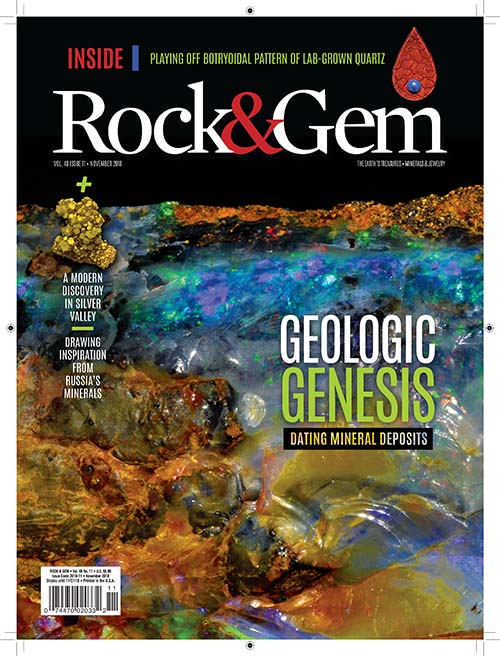 Trilobite Tuesday: What is a trilobite?

Rock & Gem is about support and service