Vanadinite and coronadite are unique, each in their way, but when they come together in specimens, it’s without a doubt a dynamic duo moment.

Let’s look at coronadite first. In this specimen, the matrix mineral this lead manganese oxide mineral most often presents in its recognizable black metallic color. A member of the coronadite group of minerals, it is found in a variety of localities within the U.S., Morocco, France, and India, to name a few.

Coronadite is one of the many minerals named after someone. In this case, the someone is Francisco Vasquez de Coronado, a 16th-century Spanish conquistador and noted explorer of the southwestern region of the U.S, according to information at classicgems.net.

Additionally, this mineral falls in the middle of the Moh’s Hardness Scale, at 4.5 – 5.

Building on the solid base set forth by coronadite is vanadinite crystals. It’s an unmistakable mineral, often appearing as bright red, orange, yellow, brown, and at times, even a combination of green and brown. Softer than coronadite, vanadinite ranks at 2.5-3 on the Mohs Hardness Scale.

A member of the apatite group, vanadinite may look familiar, as it shares a similar structure and appearance as mimetite, which is also part of the family of isomorphous hexagonal minerals Minerals.net.

Most often presents as prismatic crystal form or short and stout hexagonal shape.

Vanadinite’s primary locality is its claim, quite literally, to fame. Found in Mibladen, Morocco, the locality is well known for the abundance of vanadinite examples found. Within the U.S., vanadinite is only significant in Arizona, according to Minerals.net.

As this specimen illustrates, separately, coronadite and vanadinite are fascinating. Together, these two create a remarkable example of how nature’s process of fusing two things can create an extraordinary new specimen.

Our thanks to mineral-auctions.com for the opportunity to feature specimens from their upcoming auctions. The photos pictured are from the inventory of www.bandlminerals.com, owned by Bob and Lisa Williamson. 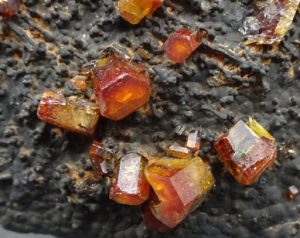 The Missing Water of Mars Not Really Missing after All?