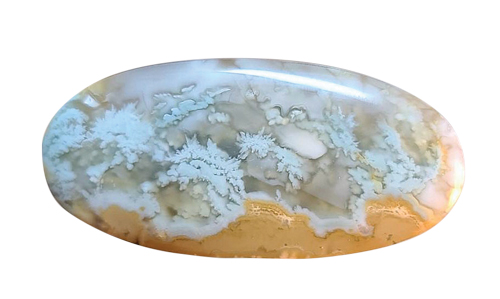 Challis plume agate is found in central Idaho and has many of the attributes of characteristic Idaho materials. There’s so much beauty in each piece you cut!

If you know what are agates, you may be familiar with the unique look of Challis plume agate. This material has a fascinating array of colors and patterns such as its seafoam green to dark green feathery plumes, mixed with yellow agate. This color combo is shared by Prudent Man Agate. The banded outer golden flame pattern is reminiscent of Wyoming’s Lysite agate. 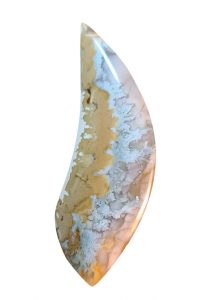 To top it off, Challis plume agate also has various pockets of botryoidal agate with an angel wing cap.

How to Find Challis Plume Agate

Finding this material isn’t always easy, every once in a while you’ll see some on eBay or Facebook and at shows.

It usually comes in a seam, generally in larger sizes in the 2- to 10-pound range. This is like graveyard plume and others that form in the same way. When finding rough, it’s difficult to judge what you’ll be getting on the inside, but generally, you won’t be disappointed. 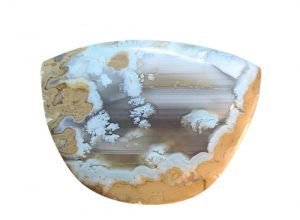 When starting to slab this material, there is usually a rough or angel wing top, which gives you an idea of what direction to cut. I’ve found it's best to cut top to bottom to display the best patterns, much like cutting a lace agate to see all the layers.

When you have the slabs cut, and you plan to incorporate the angel wings in your cab designs, it's best to let them soak in hot soapy water for a few hours. Use a steel brush to knock all the dirt out of the angel wing cap unless you plan on just cutting around it and use only the solid portions of the agate.

When starting to draw out your designs, bench testing this material is important. It can contain fractures, some being visible, and others not so much. Tap it on a wood surface gently and see if it breaks. From there, you can start drawing out all your preforms on the solid pieces.

The cabbing process can be a little tricky, as this material varies in hardness. The bottom rind (golden flames) is usually much softer than the top agate portions. Use a softer touch when dealing with this. The angel wing cap can also be brittle to grind. When grinding, you chance losing some of the strands as they break off.

To start, grind down your shape on an 80 grit steel wheel. Be a bit cautious on the golden flames so you don’t undercut it too much from the rest. If you are designing cabs utilizing the angel wing top, be cautious when grinding, do the bare minimum at this stage until you move forward to the 220 grit.

One thing I like to do with agates with varying hardness and brittle areas is to move away from the steel wheels and use a course soft resin wheel instead, usually a 140 grit or even a 220. These grind down much smoother and with fewer vibrations, giving it fewer chances to fracture off pieces. By using a 140 soft resin diamond wheel, it will also remove deep scratches in a hurry and make far less work for you in the long run. At this point, the rest should be easy. Move on to your 280 grit wheel, and continue to dry the cab every few minutes and check for scratches.

Once all the scratches have been removed, it’s time to move forward and finish off your Challis plume agate cab.

This What to Cut column by Russ Kaniuth about Challis plume agate appeared in the August 2021 issue of Rock and Gem magazine. Click here to subscribe!