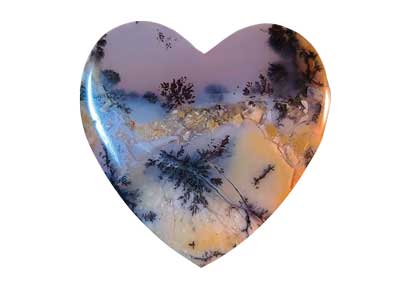 Amethyst sage agate has been around for a few decades and remains extremely popular. Its popularity is due, in large part, to the beautiful purple and gold colors and manganese dendrite patterns running throughout. 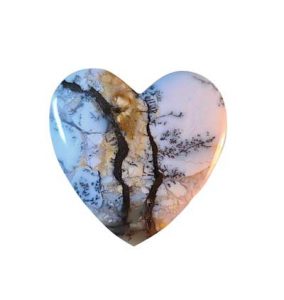 Dale Huett of West Coast Mining owns the claim, near Denio, Nevada, where the material can be found. Although this material is abundant in the area, not all examples contain the purple hues everyone is after.

The purple hue is called  “grape jelly.”  It's the appeal of this material. The translucent purple chalcedony that presents with flowering manganese dendrites is breathtaking. Color variations include pale lilac and grey with dendritic patterns - perfect for cabochons.

When beginning to cut a slab from this material, be aware that it is a hard agate, and saws should be set at a slower setting to keep the blade from overheating. When securing the stone in the vice, there’s no wrong way, as the patterns have no direction. 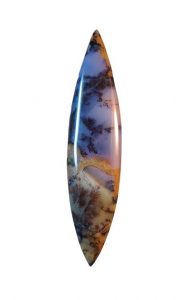 Often when I am working with a larger size piece of this type of agate, I like to cut it in half first to see what’s inside, which also reveals the patterns and their direction, which helps me to determine my next cut. After examining the stone, I reposition it in the vice and begin cutting my slabs.

As with all agates, you might end up with a few fractures, but this material is generally pretty solid. It’s always best to bench test any agate slab to check for invisible fractures before cutting preforms. To do this, lightly tap the slabs on the edge of your workbench, which will usually knock off loose pieces, or indicate that the slab is solid and good to go.

Moving Through the Cabbing Process

Once your preforms are cut, and you are ready to start cabbing, begin with the 80 grit wheel, but be cautious not to chip too much off the back edge. With harder agates like this, my practice is to grind the preform shapes just a tad larger than my patterns, about .5mm away from my drawn-out lines.

Next, I go to the 140 grit soft resin wheel, which is coarse enough to still grind material but does so in a softer manner than steel wheels. Additionally, it allows me to avoid any further chipping on the back edge as it smooths the edges and domes the top of the cab nicely. Using a 140 grit soft resin wheel means less effort and time will need to be spent on the 280 and 600 grit wheels. 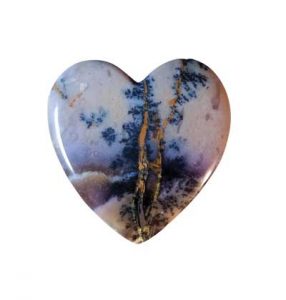 The rest of the process is quite routine, finishing with the 14k grit wheel. At this point, the cabochon should reveal a beautiful high gloss polish. If you wish to go a step further, to obtain more of a mirror polish, you can use a leather buff with cerium oxide.

If you are interested in obtaining this material, contact West Coast Mining via email at WCMining@bmi.net. The amethyst sage agate mined in this location range in size from that of a baseball to a VW Bug.

This What to Cut column about amethyst sage agate previously appeared in the September 2020 issue of Rock & Gem magazine. Click here to subscribe! Story and photos by Russ Kaniuth.

Sharing a Passion for Rockhounding (Part 1)