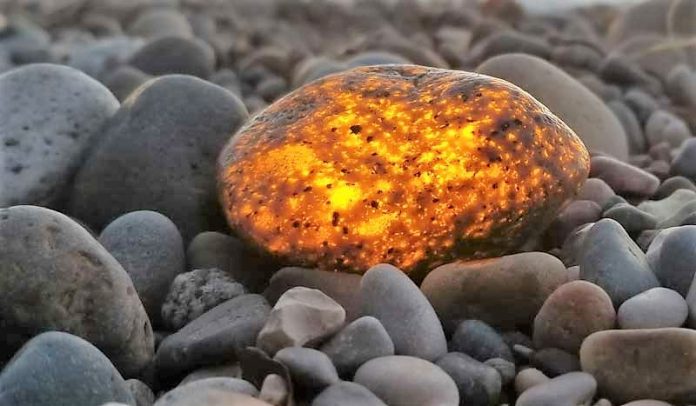 How to find Yooperlites is a popular question once people learn about these fluorescent sodalite rocks on the shores of Lake Superior.

Hunting for Yooperlites on Lake Superior

One of the most memorable aspects of the time my wife, Brenda, and I spent in Michigan’s Upper Peninsula was the opportunity to go hunting for Yooperlites with Erik Rintamki, the person who discovered specimens of Yooperlite along the shores of Lake Superior and gave them their unforgettable name.

First, without the aid of UV light, I carefully studied his specimens of Yooperlite. I noted color, density, grain patterns, and used a loupe to discover any other clue to possibly find specimens during the day. In daylight, they look like thousands of other rocks along the shoreline. They only reveal their hidden secrets and beauty in UV light.

After inspecting the Yooperlites, Brenda and I set out on our own to see if we could discover some in daylight. After several hours, we had 20 specimens we were sure would fluoresce. When we brought them back to Erik for review, all 20 failed the test. Erik then offered to take me out that evening to teach me how to find Yooperlites. As you can imagine, I gladly accepted the offer.

In all my years of rock collecting, I have never collected in the dark, except in shaft mines, and I remember thinking to myself that this was going to be a new experience.

As we arrived, the sun was setting over the water and we made our way through the dense forest to the shoreline. Prior to leaving the vehicle, Erik took two battery-free emergency light sticks and individually taped them to 5-foot fiberglass poles.

One pole he set into the ground to mark the area we entered the beach and the other Erik pushed into the beach at the waterline. He explained that he learned the hard way about retracing his steps when he was hunting for Yooperlites at night. He was lost on the beach until dawn. There is little to no light pollution in most areas of the Upper Peninsula, especially on the shoreline. Dark in the Upper Peninsula is very dark.

We began walking several hundred yards toward the setting sun. After what seemed like a mile, there it was, like a hot lava ball on the shoreline. WOW! My first Yooperlite! We walked over three miles of shoreline that evening and found several Yooperlites.

Without Erik’s guidance, I would not have found as many as we did, if any at all. Just like a process for hunting the Lake Superior agate, Erik has developed his skill in finding the elusive Yooperlite. The tools, angle of the UV light and how to scan the shoreline are just a few skills that often lead to a successful hunt.

Another valuable tip is to walk the shoreline with care. If you take several steps, turn around and shine the UV light behind you, where you just walked, there’s a greater chance of spotting a Yooperlite. Footsteps can move the specimens so the fluorescing angle becomes visible. Hunting at night is an amazing experience, and quite different than shaft mining or open-pit mining. Walking in pitch darkness over uneven rocks can be challenging, too, but rewarding.

Of the specimens collected that evening, most displayed fluorescing sodalite patterns. There are distinctive patterns and they are named according to their visual design: Gemmy, Flower or Snowflake, Spray Paint, Bands and Striations and Galaxy. How and/or why they take on these patterns is a geological mystery at this time.

While the ability to find Yooperlites at night is certainly the reward, it’s not the only one. The bio-life under UV light is something out of science fiction. Spiders and moths are a deep velvet-violet-purple, toads a fluorescent green, and even bird excrement is a psychedelic blue.

Although bio-life under UV light is fascinating, it can also be a distraction. I say that because elements of nature such as crinoids, corals, Petoskey stones, and some bio-life, as well as the artificial fishing lures used by Great Lakes fisherman to catch salmon, all fluoresce.

There is also something soothing to the soul about walking the Upper Peninsula shoreline, where nature’s rhythmic action of waves, water, and sand creates an abundance of beautiful tumbled polished rocks. Lake Superior is the second-largest freshwater lake in the world, with depths of 1,333 feet and a shoreline of 2,726 miles (including Canada).

While the shoreline is stunning, the sky offers its own brilliant display. On a clear night in the U.P., the Milky Way Galaxy can be seen in all its splendor and majesty. In fact, a few nights after our departure, a spectacular view of the Northern Lights was visible dancing along the sky off White Fish Point.

Sharing An Appreciation for Yooperlites

Part of the joy of hunting and collecting Yooperlites, and any rock or mineral, is the chance to discuss the joy of rockhounding with others. I was invited to speak at a local private school in the area of Charlottesville, Virginia, about minerals and geology as part of an earth science program.

Because we had just traveled to the Upper Peninsula four months earlier, Brenda and I also shared information about Yooperlites. Once the room was darkened and the UV light was cast on the specimens, the student response surpassed their interest more than any of the other specimens we brought.

For years, Superior agates and Petoskey Stones, both of which are hard to find, highly prized, and worthy of any collection, have dominated interest in Michigan's rock collecting offerings, and now they have to make room for a third: Michigan’s new hot rock – Yooperlites!

This two-part series by Wayne Peterson about Yooperlites appeared in a previous issue of Rock & Gem magazine. Click here to subscribe!

What is Bubblegum Agate?