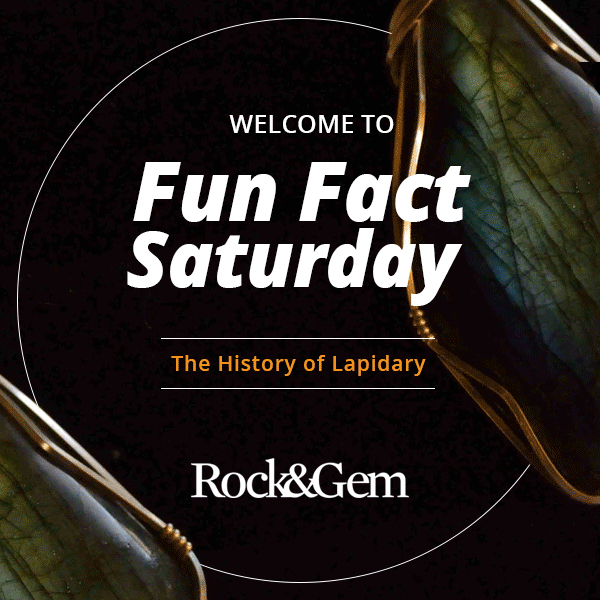 "Necessity is the mother of invention."

This ancient proverb may be, in my opinion, one of the most 'spot-on' observations in history. It certainly applies to a number of inventions and intentions, including lapidary.

As historical records and archeological discoveries have shown, humans were carving, chiseling, and grinding stones as far back as prehistoric times. Often to create tools and weapons, the earliest acts of a purposeful transformation of stone were likely accomplished as a result of stone breaking or cracking and early humans discovering how harder stones could help shape less hard stones.

Another proverb that could be used to describe early humans' use of what in essence is lapidary techniques is 'waste not, want not.' For even when stones or minerals would crack and break, people would find ways to use the pieces. Fast forwarding to the 13-14th century, reports from this time point to the rise in popularity of the elaborate pigment ultramarine. The blue color presented by ultramarine is distinctive and became a popular choice of artists. Back in the 14th century, artists ground lapis lazuli stone into powder to mix with oils and create the lavish pigment known as ultramarine.

As one might expect, with such demand surrounding the relatively limited supply of lapis lazuli stone, there was a rise in the falsification of ultramarine, which was passed off as authentic.

According to an article in the Paris Review, in 1824, there was an effort by the Societé d’Encouragement to prompt the development of a synthetic alternative to ultramarine. A reward of six thousand francs was offered and two men presented their formulas within a few weeks of one another. In the end, the reward was presented to German professor Christian Gmelin. The artificial form of the popular pigment was referred to as 'french ultramarine.'

There were a number of other popular material choices among early practitioners of what would ultimately be referred to as lapidary. And even though examples from this time are considered primitive in presentation, the processes used to create these early pieces would influence centuries of people working with stone and gems.

Among the materials present in examples of early lapidary work is jade, variations of quartz, amber, turquoise, malachite, sapphire, and obsidian, among others.

As time progressed and people regularly handled and worked with these materials, the uses evolved.

For example, while turquoise found favor with many cultures in Mexico, Tibet, and Egypt, as well as Native Americans for use in making jewelry, it was also ground into a powder to create a form of eye shadow makeup, as reported by Dr. Gerald Wykoff GG CSM, in an article for theInternational Gem Society.

In the same way, sapphire has also captivated people of various cultures. It has appeared on the garments of royalty and clergy for centuries and was seen as a symbol of nobility, truth, and faithfulness, according to an article by the Gemological Institute of America. Taking the belief in sapphire even further, it's reported that in the Middle Ages, healers and medicine men believed that touching a blue sapphire to the eyes would soothe tired eyes and improve vision.

There's no question things have changed considerably since prehistoric humans were using stones to cut other stones and discovering how shaping and carving stone could change every-day activities for the better. Yet, the appreciation for the value of lapidary efforts is the focus of timeless attention.