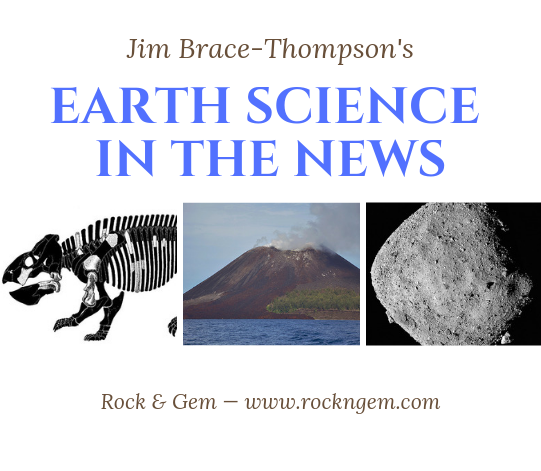 I reported on Indonesia many times in 2018. Still, Earth processes around the “Ring of Fire” show no sign of mercy as they impact this island archipelago, home to the world’s fourth largest population (260 million souls). On December 22, 2018, the volcanic island of Anak Krakatau erupted. A flank of the volcano collapsed into the sea, generating a tsunami that swept without warning across the Sunda Strait to hit coastal regions of Sumatra and Java.

In the immediate aftermath, news agencies reported hundreds of homes and hotels were swept away in a disaster reminiscent of the September 28 tsunami that killed more than 2,100 on the Indonesian island of Sulawesi following a magnitude 7.5 earthquake. Although the tsunami was relatively small (1–2 meter high waves, or 3–6 feet), its effects were compounded by high tide coinciding with a full moon, as well as by an extensively developed and densely populated shoreline. It is estimated that a mere 24 minutes elapsed between the collapse of the volcano wall and waves crashing along the shore.

Usually, experts worry about tsunamis spawned by earthquakes. They have placed their attention—and have designed warning systems—around such danger zones. But they are now reassessing the danger from offshore volcanoes in countries such as Japan and the Philippines and the U.S. state of Alaska.

As of this reporting (Dec. 30) over 460 people have been confirmed dead, 1,500 injured, and dozens missing. 24,000 people along the coast have been evacuated as danger continues. For instance, a “Level 2” eruption alert was issued on December 27, with concerns that the volcano might erupt yet again and send more tragedy in its wake. Efforts to assess the danger have been hampered by continuous volcanic activity, thick ash, and sulfurous clouds.

Anak Krakatau translates to “Child of Krakatoa”. The volcano is a remnant of Krakatoa, which issued one of the most destructive eruptions in recorded human history in 1883. That blast was heard 3,000 miles away. It destroyed 165 villages, killing over 36,000 people. Many were swept away by a tsunami similar to that recently experienced, and the ash it sent into the atmosphere cooled temperatures around the globe. In the 1920s, Anak Krakatau emerged from the caldera left behind by that much larger cataclysm.

Per University of Edinburgh paleontologist Stephen Brusatte, the long-accepted “truth” that he and others have long taught their students has been that dinosaurs ruled while mammals drooled during the Mesazoic Era of Earth history. The Mesazoic included the Triassic, Jurassic, and Cretaceous periods. By the end of the Triassic, dinosaurs were growing to fantastic size while mammals scurried in the shadows, growing no bigger than rats or shrews.

Well, a new discovery has upended such thinking, notes Brusatte. Per a report in the journal Science, paleontologists have discovered Lisowicia bojani. This mammalian cousin was the size of elephants and walked alongside dinosaurs in Poland during the Late Triassic period. Researchers who made the discovery say they will extend their search for similar critters into Russia and the Ukraine.

One of the discoverers, Grzegorz Niedwiedzi, asks the rhetorical question, “How many surprises are still waiting for us in the rocks?”

In yet another of a series of recent encounters in the asteroid belt between Mars and Jupiter, NASA has announced the arrival of space probe ISIRIS-REx at a diamond-shaped asteroid called Bennu on December 3. In January, the spacecraft will begin orbiting this small rocky outpost in our solar system, studying its surface in detail.

If all goes as planned, within the coming year, ISIRIS-REx will swoop down to scoop up 2 kilograms of surface dust with a robotic arm for a return to Earth in 2023. This is one of multiple on-going missions to survey asteroids, gather samples, and bring them home for further study.

Why the hullabaloo with missions costing upwards of $800 million each? The hope is that samples will give us insight into the formation of our solar system and our own planet Earth. And in this instance, some believe Bennu may be on an eventual collision course with Earth. At least it will be good to know what hit us!