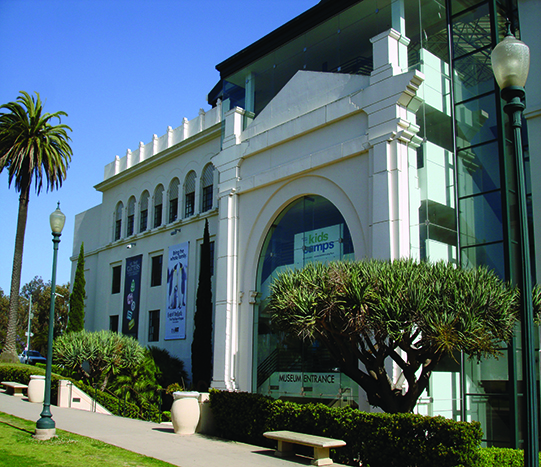 At the famous Balboa Park in San Diego, just south of the San Diego Mineral and Gem Society & Museum, is the San Diego Natural History Museum (SDNHM) — or the Nat as the locals call it. SNDNHM is one of the most significant natural history museums in the country.

The San Diego Society of Natural History dates to 1874. In 1917, the society purchased a vacant building from the 1915 Panama-California Exposition. Later, a new building was commissioned to architect William Templeton Johnson to fit the museum’s expanding needs, and the new museum opened in 1933. It served visitors for decades, before undergoing a significant renovation. In 2001, after a nine-year and $38 million capital campaign, the museum reopened its doors. The major renovation added 90,000 square feet, more than doubling the museum’s size.

Taking It All In

My husband and I first visited the museum in 2000, before the extensive renovation, and we truly enjoyed the collections. I was also captivated by the distinctive architecture and the highly ornamental Spanish-Renaissance freezes on the building, which, unfortunately, were eliminated during the renovation, giving way to a more modern building facade.

We returned to San Diego in 2011, when I participated in the poster session of the Gemological Institute of
America’s International Gemological Symposium at close-by Carlsbad. We took the opportunity to revisit the SDNHM and thoroughly enjoyed the special exhibit “All that Glitters,” which display through April 2012.

The exhibit featured a spectacular selection of natural mineral crystals, exquisite jewelry, and works of art. Among the items were many local mineral specimens from San Diego County, one of the world’s best-known gem-producing areas. We saw stunning hot pink tourmalines, kunzites, spessartine garnet, and morganite crystals. Also on exhibit were gold — discovered in southern California in the late 1860’s — and benitoite (the official state gemstone of California) from San Benito County.

An Area Rich With Mining History

The famous pink elbaite tourmalines and green and blue tourmalines on display are from San Diego County’s pegmatite mines. The Pala Gem district, near the town of Pala, is also renowned for its other pegmatite minerals - quartz, feldspar, garnet, lepidolite, morganite, aquamarine, kunzite, and other rare minerals. Since the second half of the 19th century, the mines had been worked, with lithium-bearing lepidolite being the primary target. Then, in 1898, pink tourmaline was found at the Himalaya Mine, and later at the Stewart Mine. Pink tourmaline’s beauty attracted a far-away royal who became a patron, the Empress Dowager Tzu-Hsi (pronounced “Tsoo Shee”), or Cixi of China. The craze for pink tourmaline took place at the turn of the 20th century, and Tiffany’s & Co. facilitated the export. Between 1902 and the Dowager’s death in 1911, 120 tons of tourmaline was mind, with the majority sent to China. The beginning of the Chinese revolution and the abdication of her son, Emperor Puyi, in 1912 and the onset of World War I caused the mines to go dormant.

In 1969 the Pala Stewart mine hit a new tourmaline find, and the Tourmaline Queen mine produced the most famous blue-cap pink tourmaline specimens, some with peach-colored morganite attached.

Another famous gem discovered within the same pegmatite mines was kunzite. This mineral is the pale purple/pink variety of spodumene. When the early specimens were found, they were sent to George F. Kunz, a gemologist at Tiffany’s, who identified the mineral and named it after himself.

Today beautiful tourmaline and kunzite are mined at the Oceanview Gem Mine. Besides the

daily underground mine operations and pursuit of great minerals, the mine is open to the public for fee-digging. The mine is located east of Pala township, in San Diego County, and has been owned, since 2000, by Jeff Swanger. The screening process involves Swanger and his team bringing out gem-bearing material blasted from inside the mine and depositing it on a pile in the center of a cleared-out area. There are tables, tubs with water, and screens, where visitors can screen for gems, mostly kunzite and quartz, and some tourmaline specimens. Fee digging starts at 11 a.m. and ends at 3 p.m., on Thursday, Saturday, and Sunday. The cost is $75 per adult, and you keep everything you find. Reservations are required to participate in fee digging, www.oceanviewmine.com.

We thoroughly enjoyed our gem-digging at the Oceanview Mine. Depending on your expertise and luck, you may come away with some excellent specimens if you visit.

Another spot in the area, also open for fee-digging is the Himalaya tourmaline mine, owned by High Desert Gems & Minerals. The mine is located near Santa Ysabel at Lake Henshaw. It is open Thursday through Sunday, and again, you keep all you find. (www.highdesertgemsandminerals.com)

I would also be remiss if I didn’t mention the SDNHM’s current special exhibit, “Hidden Gems.” This exhibit showcases 100 mineral specimens, many of which have not been on view before. They are displayed on all five floors of the museum and presented in a unique, vertical exhibit experience.

Additionally, the museum’s fossil collection includes the Cerutti Mastodon — a selection of 130,000-year-old preserved mastodon bones, molars, and tusks. Another exciting part of the collection is the Fossil Mysteries, which showcases 75 million years of southern California and Baja California fossil history. For more information about the San Diego Natural History Museum, visit www.sdnhm.org.

Planning A Visit to “The Birthplace of California”

The beautiful cityscape along San Diego’s waterfront with historical vessels open to visitors as museums is a great place to visit. Plus, there are bay cruises that offer a broader view of the port of San Diego, with the U.S. Navy and wildlife side-by-side. Coupled with the museums at Balboa Park and the tourmaline mines for gem digging, San Diego is a great destination for gem, mineral, fossil, and jewelry lovers. Every destination I’ve mentioned in this city, “The Birthplace of California” as it’s known, is a source of inspiration and education for the entire family.

NOTE: The San Diego Natural History Museum (SDNHM), currently closed as a safety measure in response to COVID-19, is slated to reopen in January 2021. Visit the SDNHM site for the latest information: https://bit.ly/3nJNTqj