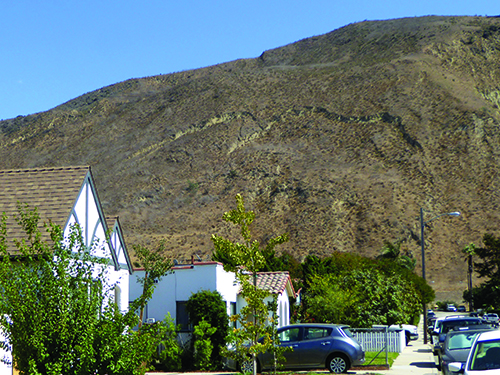 A slump is in the category of what geologists call a “mass wasting event.” A block of semi-consolidated sediment or rock slides downslope en masse under the influence of gravity in an area with a steep incline, as along a hillside or mountain slope. This block of earth shifts a short distance downward as a more-or-less coherent block.

Such movement may be quick or slow, as opposed to a landslide in which a broken-up mass of incoherent rubble rolls quickly downslope like an avalanche of snow. The slump leaves what is known as a scarp, or a concave, cliff-like surface above it. 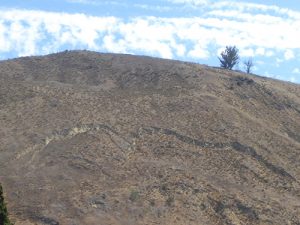 Slumps often occur if buttressing earth at the foot of a slope is removed either by natural erosion (for instance, along coastal cliffs as waves eat away at the base of a slope) or by human hands during the course of, say, urban development and road construction. They also have occurred following clear-cutting of timber on an unstable slope or from seismic events like earthquakes. Often, slumping involves what is called a “shear plane” between the block that slumps and the rocks and sediments behind it.

Slumping can occur if that shear plane becomes waterlogged by heavy rainfall.
In populated areas, a slump can pose a geohazard as blocks of earth slide downhill.

Such slides may, in turn, contribute to devastating landslides. One notorious and sad example resulting from slumping and landslides is the 2005 disaster La Conchita, California, which resulted in ten deaths as homes beneath a steep slope where overwhelmed. The evidence of thousands of years of slumps and landslides is clearly visible to anyone traveling past La Conchita on U.S. Route 101, and many slumps may be seen in the foothills surrounding my own home of Ventura, California.

Earthquakes Persist in the South Pacific