Editor's Note: Enjoy this compilation of rock, gem, mineral-related news of the day.

Ever Bigger Boulders Emerge in Nebraska

Earlier this summer, the Lincoln Journal Star ran a story about a 44,000-pound “erratic” serving as a lawn ornament in Lincoln, Nebraska. They challenged readers to send reports of still bigger erratics. In geological terminology, an erratic is a rock that has no business being where it be.

I had a friend named Fred who took mischievous glee in “salting” rocks from one field trip locality in a totally different locality to confuse would-be prospectors. That’s one way to deliver an erratic.

In the case of the Nebraska erratics, the Fred in question would be glaciers. During the Pleistocene Epoch, continental glaciers spread across Canada and the northern U.S. states. As they grew and inched their way south, they plowed through rocky masses and plucked up boulders. When the climate warmed and the glaciers melted, these boulders were dropped far from their original homes. Thus, Nebraska became littered with chunks of Sioux quartzite, a pink metamorphic rock from the Sioux Quartzite Ridge near Sioux Falls, South Dakota. Which brings us back to the newspaper challenge.

Readers reported all manner of rocks, but Konnie and Marcus Robertson took the prize. They sent a photo of a boulder of Sioux quartzite the size of a small hill and estimated to weigh 60 tons. Last time I visited Mom in Nebraska, I picked up pieces of Sioux quartzite. It’s pretty stuff. But I’m fairly sure they wouldn’t have allowed me to board my homeward plane with the piece in the Robertsons’ collection.

It gives true appreciation for the size and power of the continental glaciers of our most recent Ice Age.

Another Earthquake Strikes on the “Ring of Fire”

The so-called “Ring of Fire” is a belt around the basin of the Pacific Ocean along subduction zones that’s estimated to be responsible for 90% of the word’s earthquakes, and yet another major one has struck.

On September 6, a magnitude 6.7 quake rocked Japan’s northernmost province of Hokkaido, setting off huge landslides, cutting power throughout the island, and sending rescue workers racing into the swath of destruction with shovels, backhoes, and search dogs. Early reports claim at least 18 were confirmed dead, 300 injured, and dozens missing, and aftershocks as large as magnitude 5.4 continued to rock the island. The epicenter was near the seaside town of Atsuma, and all across the region roads buckled, buildings tilted, and mudslides buried homes and cars as entire mountainsides collapsed.

Dramatic film clips showed lights flicking out across entire cities as the initial quake hit at 3:00 AM. As many as 25,000 troops and resuce workers have been deployed to Hokkaido.

Ice on the Moon for Future Space Missions?

When we humans finally leave Earth for flights to other planets, we may be stopping by the Moon for a sip of water along the way—or for a block of ice to chill our Budweiser. NASA’s Moon Mineralogy Mapper (M3) instrument has identified 3 areas near the Moon’s poles that likely hold ice beneath the surface, mostly within impact craters. Scientists speculate comets delivered the ice, and they say this could provide a useful resource should we one day colonize the moon and beyond. 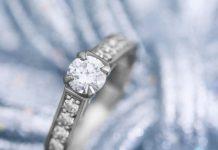 Are Zircon and Zirconia the Same?

Supernovas Lose Luster as the Pot at the End of the...

Earth Science In the News: Rendering the Past in Art