I first became interested in fluorescent minerals in the 1930s, when the property of fluorescence was considered more of a novelty than a legitimate collecting focus. Granted, ultraviolet (UV) lights were being used at Franklin and Sterling Hill, New Jersey, to separate the red-fluorescing gangue mineral calcite from the pay ore of fluorescent willemite and its companion non-fluorescing ores zincite and franklinite. Back in those early days, the use of UV lamps was mainly restricted to scientists and miners.

Some of the more progressive museums had small, fascinating exhibits of drab-looking minerals, mostly from Franklin, and some chunks of calcite that came to life when you turned on an ultraviolet light source. Such a display at the Yale Peabody Museum in New Haven, Connecticut, is what started me on my collecting career in 1935!

At that time, few collectors spent their nights in the field in search of fluorescing minerals. One reason was the lack of affordable and portable lamps and battery packs. In the 1920s, the main source of ultraviolet excitation for mineral study was a machine called an “iron spark”. This cumbersome machine was not unlike a welding torch in some ways. It had to be plugged into a source of high energy. It gave off lots of UV light, but it also gave off visible light, which made it difficult to accurately judge the color response from a subject rock. Unless the response was really bright, it was partially masked by excess visible light.

The revolution in collecting fluorescent minerals came when Ultra Violet Products, a company in California, developed a portable filtered shortwave UV lamp. The crowning touch was a portable battery to go with this handheld lamp.

The Yale exhibit I saw in 1935 had both shortwave and longwave lamps. The curtained display of rainbow rocks exhibited a dramatic color change that thrilled and mystified a young kid like I was at the time. The control switch got a really good workout that fateful day.

When World War II started, tungsten became a strategically important metal, as it was used in all sorts of alloying operations to toughen steel. The most important sources of tungsten are the minerals powellite and scheelite. It so happens that both these minerals, to a greater or lesser degree, respond brightly under shortwave UV excitation. Prospectors soon discovered that the discarded waste rock on the dumps of many California gold mines was rich in these two tungsten minerals. It didn’t take a genius to figure out that, with a portable UV lamp, one could scan these dumps and find a new pay ore: tungsten-bearing scheelite. The beauty of this was the ore had already been mined and broken up and was ready to be hauled off to a crusher and smelter!

After the war, other lamp manufacturers began to produce UV equipment that was useful for mineral collectors. Some of these lamps were inexpensive kits for the amateur collector, which helped get more and more people involved in collecting fluorescent minerals. My first lamp was a $20 kit I assembled myself! It produced both shortwave and longwave UV light. I even used that little lamp when I researched some 70 localities for fluorescent minerals, which I recorded in my master’s thesis, “Luminescent Minerals of Connecticut”, and when I wrote Fluorescent Minerals of Franklin, New Jersey (Fluorescent House, 1961). That was well over 50 years ago!

UV equipment for collectors made a quantum leap in the latter part of the 20th century. Now there are lamps that give off extremely powerful shortwave or longwave energy or both! To add to the fun, some new lamps give off “midwave” UV energy, wavelengths that fall between the short and long extremes. All these new lamps are brighter, excite a much greater range of fluorescent minerals, and last longer.

The problem with earlier UV shortwave lamps was that the special filter needed to pass UV energy while blocking ordinary light eventually lost its effectiveness. Gentle heating might restore the filter for a short time, but those old lamps, as useful as they were, had a fairly short field life. The new lamps of today are sturdier and last much longer, which is a plus for cost-conscious hobbyists. In addition, some minerals that respond very poorly or not at all under the two standard shortwave and longwave UV sources respond quite nicely under the newer midwave UV source.

All of today’s UV lamps today cost a lot more than my original lamp, but today’s collector enjoys a greater number of identified fluorescent species and brighter responses from their specimens! Prices for a lamp today range from around $100 for a single-wavelength lamp to over $400 for a powerful lamp that emits several UV wavelengths.

Surge in Fascination with Fluorescent Minerals

The current increase in interest in fluorescent minerals is exciting! Back in 1960, 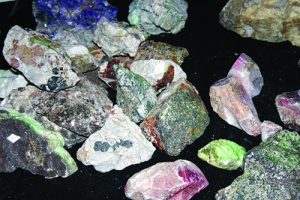 I started a monthly column in Rocks & Minerals magazine titled “Collecting Fluorescent Minerals”. It was the first column exclusively devoted to minerals that respond to UV light. I like to think it had some positive effects on the growth of this type of collecting.

That growth has had delightfully colorful results! Dozens of mineral species that were not recognized as fluorescent in the mid-20th century are now eagerly sought and collected using the new equipment. The best known and most easily recognized classic fluorescent minerals are those from Franklin and Sterling Hill. The zinc ores from these deposits are dominated by brilliant red-fluorescing calcite, a gangue mineral, and green-fluorescing willemite, a rich zinc silicate ore. The other important ores, zincite and franklinite do not respond to any UV light wave.

My favorite place for collecting fluorescent minerals is the Sterling Hill Mining Museum because of the fee-digging dump. This dump was created when the mine was converted to a museum and a tunnel was extended for an underground tour. That dump is regularly refreshed with ore hauled from underground for folks who pay a fee to enjoy collecting!

Both the Franklin Museum and the Sterling Hill Museum boast impressive fluorescent mineral displays. Again, my nod goes to Sterling Hill, with its special Tom Warren Fluorescent Mineral Room. Tom was the guy who designed and built those early UV lamps that were used during World War II. Those of who you have seen your white shirt glow blue on some Disneyland rides might be interested to know that Tom’s company, UV Products, supplied those first lamps when the Anaheim, California, theme park opened!

Oddly, the mineral that gave its name to the UV phenomenon, fluorite, is quite uncommon both in New Jersey and at Mont-Saint-Hilaire. The classic sources for fluorescent fluorite are the mines of Cumberland, England. These mines shut down 100 years ago, but quantities of blue-fluorescing fluorite still appear in the marketplace, thanks in part to the huge quantities of specimens once produced in England. Today, these older specimens are added to by one English mine, the Rogerley, which was re-opened a few years ago and is currently yielding choice green crystals that respond with the classic blue color under longwave UV excitation.

The Rogerley mine is located near Frosterley (Durham County) in the extreme northern part of England. The mine was opened for specimen collecting by the American dealership Graeber and Himes, of Fallbrook, California. Cal Graeber and Leonard Himes, both friends of mine, can be found at most major mineral shows in the United States and Europe. Though they deal in a full range of choice mineral species, they highlight the lovely green cubes they mine from the Rogerley. Some of these cubes are an inch on an edge. Most specimens are completely covered with cubes that come to life as bright blue crystals when excited by longwave UV light!

The Rogerley mine specimens have not been investigated for the cause of their UV response, but plenty of work has been done on many other English sources whose fluorite gives a blue response under longwave energy. In almost every case, these fluorites have a trace of one or more rare earth el­ements like yttrium, europium and cesium. It would not be unreasonable to suggest these trace elements are also found in the Rogerley crystals.

The trace elements that are the root cause of most of the fluorescent responses you see are called “activators”. The majority of activators are the transition metal elements. Manganese is one such element and is the chief activator in the calcites from Franklin and Sterling Hill. Lead can be an activator, as in the halides from the Salton Sea in California. Uranium is a very strong activator, but not all uranium minerals respond under the UV lamp. Those that do, including autunite, meta-autunite and schoepite, are bright green under the shortwave lamp. Minerals in which uranium is a trace element can also fluoresce. Chalcedony, common in many desert areas, contains a trace of uranium salts, which cause it to fluoresce green.

Everyone’s favorite zinc arsenate, adamite from the Ojuela mine in Mapimi (Durango), Mexico, can fluoresce a brilliant green, thanks to a trace of uranium. Adamite that does not fluoresce or responds poorly is inhibited from doing so because of a “quencher”, either iron or copper. Trace amounts of these two metals in a mineral can inhibit any fluorescent response.

Mercury is an unusual, but delightful, activator. The calcite from the mercury mines at Terlingua, Texas, and a couple of lesser-known mines in Mexico has trace mercury in its structure and responds magnificently under both long- and shortwave UV. Under a longwave lamp, the Texas calcite is a bright pink, while under shortwave UV it is a vibrant blue. The pink-fluorescing calcite will also phosphoresce a superb blue when the longwave UV lamp is shut off.

With the increased participation of foreign mineral dealers in American shows, a greater variety of fluorescent minerals has come into the United States from foreign deposits. Knowledge of the variety and number of minerals that are known to fluoresce increases among collectors every year because the hobby itself is growing dramatically. It is not unusual to see a collector walking around a mineral show, UV lamp in hand, scanning the minerals on a dealer’s table for a response. In doing so, they have unearthed hitherto unrecognized fluorescent species.

A few of the minerals from other lands that are now commonly collected are talc from Pakistan, which fluoresces white under shortwave UV light; zircon from Australia, which fluoresces yellow under shortwave UV; blue-fluorescing scheelite and white-fluorescing powellite from China; and hydro-boracite from Turkey, which gives a blue response under shortwave excitation. Dozens of common to rare fluorescent species from foreign countries that were unheard of 50 years ago are now commonly collected.

It is very exciting that fluorescent minerals have moved from a novelty only seen in museums to an integral part of the collecting hobby. Major shows and many local shows feature fluorescent mineral displays on the show floor. Fluorescence is definitely here to stay!

He holds the Carnegie Mineralogical Award, is a member of the Rockhound Hall of Fame, and has been writing for Rock & Gem since its inception.

Bob lectures about minerals, and has written several books and video scripts.

Dinosaur Ichnology: The Study of Tracks Comes of Age

On the Go: Catching Up With Gail and Jim Spann