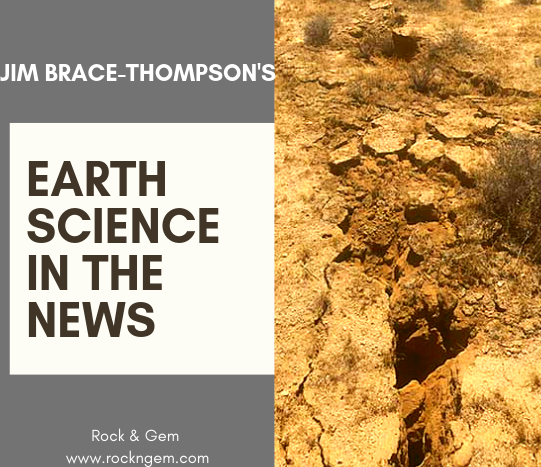 It was mid-morning, the Fourth of July. The waitress was taking our order for holiday brunch with a friend in Ventura, California when the entire restaurant rolled. Not just once, but again and again, as if we were on a ship at sea. Window blinds swayed in sync with light fixtures overhead. Thus, we knew we were experiencing a big one.

Big, indeed! As everyone checked cell phones, we saw we had experienced an earthquake registering magnitude 6.4, the biggest quake to strike California in 20 years. Of course—despite being felt by 15 million people—Siri told me no earthquakes were occurring in California. She kept repeating, “No earthquakes reported in 72 hours.”

Tell that to the pregnant lady running out of the restaurant, Siri!

Just when we thought the worst was over, I was in the midst of an email to my editor Antoinette at Rock & Gem the night of July 5, when it happened all over again. My entire house rolled. This time, the rolling went on much longer. Our cat scurried under our parked car and our dog went on a barking frenzy. Siri still insisted nothing unusual was happening, but by morning, newspapers told us we in California had experienced a huge magnitude 7.1.

Both the July 4 and 5 quakes were centered in the sparsely populated Mojave Desert near Ridgecrest. The rolling we experienced 170 miles away (across the Mojave, over the Transverse Range, and across the coastal plain) was nothing compared to what rocked Ridgecrest in the Searles Valley region, where houses burned from gas leaks, mobile homes were knocked off foundations, and stores and the local library saw everything spill from shelves. Remarkably, no fatalities were immediately reported.

Between the two big quakes, a massive fissure ripped open that was visible from space, and thousands of aftershocks reverberated throughout the Ridgecrest region while folks camped out on lawns rather than re-enter their homes. Seismologists predict at least 30,000 aftershocks in the next six months. As for my wife Nancy and me, we’re checking earthquake insurance and constructing a survival kit in the garage. Ain’t livin’ in California fun?!

Accurately Simulating Earthquakes in the Lab

To help with prediction and prevention efforts, scientists have long sought to produce realistic earthquakes in a lab setting using simulations. However, no efforts with such so-called “labquakes” have proven satisfactory when comparing data from simulations against data from actual earthquakes.

That was then; this is now!

A team including Osvanny Ramos of the University of Lyon in France recently published results of a model using a two-dimensional array of disks. They placed these disks under stress until they slipped and slid.

Then, they statistically compared their “labquakes” to features shown by actual earthquakes.

The results have proven to be the best to date in mimicking the behavior of an actual tectonic fault, or, in the words of Ramos, providing “a reliable analog system that matches geological observations.” Whatever. His team ran their experiment not once, but over a million times. In something of an understatement, this produced “an exceptionally large data set.” And that data set has replicated important known seismicity laws in remarkable ways. In other words, this finally may prove to be the model scientists have been seeking for more than a century.

If such experiments truly can unlock “the essential ingredients that govern the dynamics of real earthquakes,” it is hoped we may be better informed in looking for precursors that signal the imminent arrival of the real thing, thus saving countless lives when The Big One strikes along fault lines all around our Earth.

Earthquakes on our planet are largely caused by plate tectonics, with huge sections of

Earth’s crust sliding against, past, and over/under one another. Per a new theory put forth by geophysicist Stephan Sobolev and geologist Michael Brown in the journal Nature, glaciation may have helped to lubricate the edges where plates meet and thus resulted in periods of increased tectonic motion. They point to two cycles, in particular, that occurred 2.8 and 2.3 billion years ago and a third cycle 750 million years ago following a global glaciation period known as “Snowball Earth.”

These three points in time seem to correspond both to increased glaciation (which adds large quantities of soft sediments to the edges of continental plates) and to increased subduction speeds, presumably caused by lubrication of subduction zones by glacially derived soft sediments. The impacts were long-lasting. For instance, each period of increased tectonic activity seems to have lasted several hundred million years.

Not everyone is convinced. For instance, geologist Whitney Behr wrote a commentary to this theory when it was published in which she notes periods of increased mountain-building activity could also have delivered such sediments to the edges of continents.

We can be sure research, discussion and debate surrounding earthquakes will continue.

Earth Science In the News: Revised “Slip Law” for How Glacial...