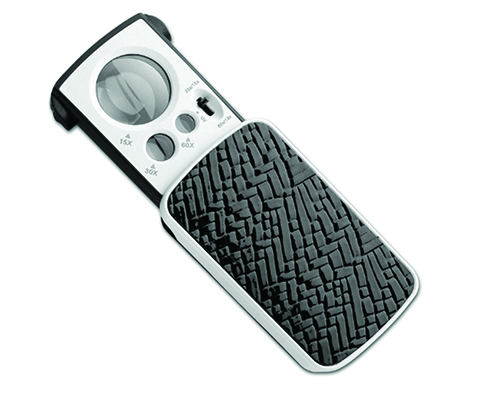 Many years ago, my elementary school teacher said something about the use of magnification that I’ll never forget. He said, “The ability to inspect nature using magnification is like opening the door to a spectacular world we suspected may exist but could never truly see on our own.”

While it is a memorable comment, it’s quite lengthy for a child to remember. However, writing the sentence on the chalkboard 100 times, as a reprimand for talking in class, helped me commit it to memory.

With that, we wanted to include magnification devices in our Tools of the Trade section to highlight a sample of the many different hand-held magnifiers, loupes and desk-top devices receiving praise and generating popular interest.

4 Tools For A Detailed View

This single tool offers a lot of options for a lot of different scenarios. The device provides 10x, 20x, and 30x magnification options. In addition to the options for magnification, the LED light automatically activates when the magnifier is opened, and there is also a UV black light element. 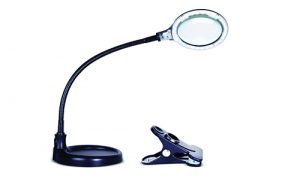 Versatility is one of the words often used to describe this device. The option to use it as a table lamp or clamp it to a workbench or desk opens the door to comfortably inspecting specimens from a workspace. The lens magnification is 1.75x, and an LED light offers added assistance with visibility of objects and tasks at hand. 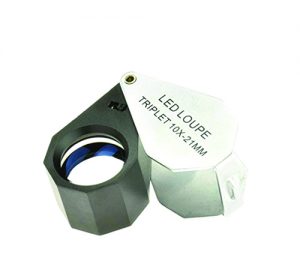 This 10x magnifier loupe features a three-element lens designed for presentation of objects in sharp visibility. This model is lauded for the lack of distortion produced when used and the consistent clarity when viewing intricate aspects of objects, including minerals. As one Rock & Gem community member said, it was the first magnifier he bought and he’s purchased a few since, not because they wore out, but because he loses them from time to time.

This hand magnifier is touted as one of the best devices to have in the field. The case is machined metal and coated with a matte black finish, and the lens (as the name implies) consists of three lenses. This provides a crisp view of the finite details within rocks and minerals.