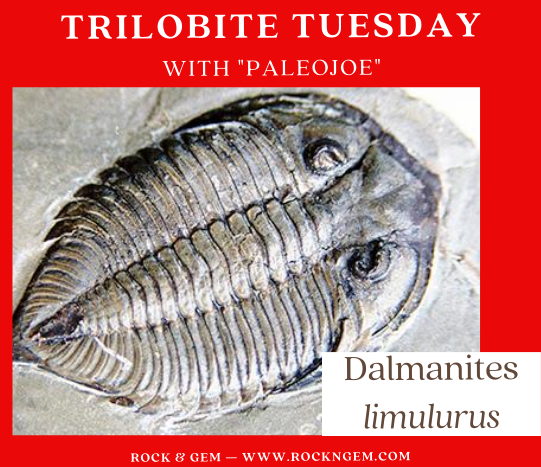 As you may be well aware, trilobites are an extinct form of arthropod related to insects, crabs, crayfish and horseshoe crabs. These creatures are called trilobite due to the three distinct “lobes” running vertically through the body section. In this week, the featured trilobite is Dalmanites limulurus.

The Dalmanites is a very recognizable Silurian trilobite from the New York area.

Discovered during the digging of the Erie canal workers finding the tail sections fossilized called them “butterflies of the seas.” The cephalon ends with long genal spines that extend down to the fourth or fifth thoracic segments. Usually containing 14—16 body segments, each segment ends in a short spine.

The glabella is prominently furrowed and the cephalon has a short pointed snout. The tail section is roughly triangular in shape ending with an elongated tail spine. The eyes are large and prominent being set high on the cephalon and are crescent shaped.

A very common trilobite found in the Rochester shale of New York they grew to just under three inches including the tails spine.

How Stalactites and Stalagmites Form in Caves