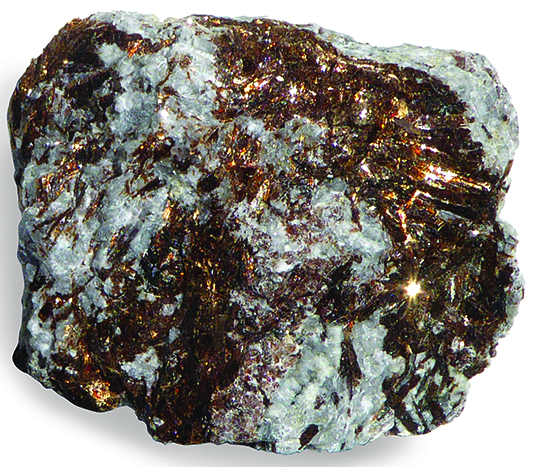 Astrophyllite is one mineral that certainly lives up to its name. “Astrophyllite” is a combination of the Greek words astron (star) and phyllon (leaf). Its shiny bronze-to-gold-colored crystals often radiate out as blades from a common center in stellate (starlike) patterns.

Against the light-colored matrix in which it is usually found, it looks like a glorious starburst of gold leaf. By contrast, on a streak plate, those metallically bright crystals leave a rather dull and pale greenish-brown streak.

Technically speaking, astrophyllite is a hydrous sodium-potassium iron manganese titanium silicate. Whew, that’s quite a mouthful. It exhibits micaceous cleavage, meaning that it splits apart in thin, brittle leaves, much like a book of common mica. 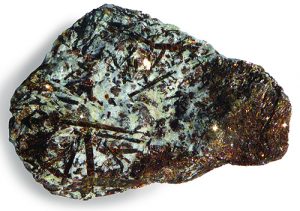 Unlike common mica, astrophyllite is very rare. It grows within rather coarse-grained igneous rocks such as nepheline syenites and alkali granites (also sometimes called “plutonic rocks”) alongside quartz, feldspar, mica, zircon, aegirine, and other minerals.

The localities where astrophyllite has been found are often as remote as the mineral is rare. It was originally described from small islands in the Langesund Fjord near Brevig, Norway in 1854. Other specimens have been found near Narsarsuk and Kangerdluarsuk in Greenland; at Mont Saint.-Hilaire in the Canadian province of Quebec; Pontevedra, Spain; Los Islands, Guinea; Pilanesberg, North West Province, South Africa; and on Pikes Peak in the U.S. state of Colorado. Currently, most specimens you’ll find at gem shows and in rock shops come from the Khibiny Massif on the Kola Peninsula of Russia.

Owing to its rarity, astrophyllite has no real economic uses other than as a wonderful specimen to admire within your collection.

He is an inductee of the National Rockhound & Lapidary Hall of Fame within their Education Category.