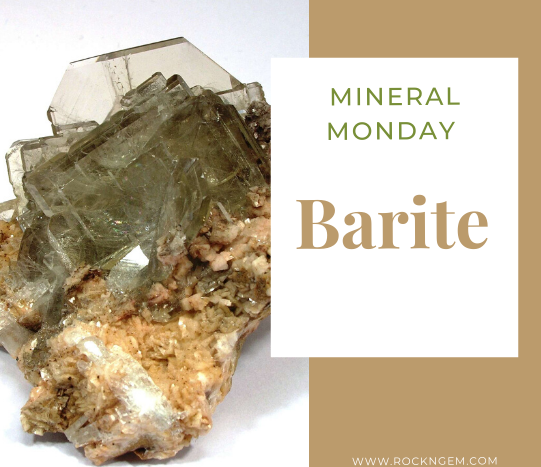 Barite is one of those minerals that seem to "be everywhere." By that, I don't mean locality and abundance, more about its presence in various aspects of industry, science, and mention in mineralogical connections. Plus, there's the controversial aspect of the mineral, but more about that later.

As the main ore of barium, barite is used to produce paper and rubber, and it's part of the process of preparation of the digestive system for x-ray procedures, as stated at www.minerals.net. All photos are courtesy of The Arkenstone Gallery of Fine Minerals and specimens are available at Arkenstone's website, www.irocks.com.

Barite is not limited to a specific region of the world, as it's been discovered in several locals from Europe to China and Peru to Canada. The variety of locales also lends to the wide range of colors associated with specimens of barite. Bright yellow is a common color of barite extracted from localities in the U.S. and Canada. In contrast, some of the most well-known localities for barite, such as Sichuan Province, China, Mibladen, Morocco, and Huanuco, Peru, are known for producing blue specimens of barite, according to information at www.minerals.net. Additional colors of barite include brown, rose-colored tint, colorless, white, and green.

As for the controversy, it's all about the name. The origin of the word barite is Greek, barys — which means heavy — and speaks to the minerals known attribute of being weighty. As explained on www.minerals.net, the mineral was always spelled "barite" in the U.S., and "baryte" in the U.K. Originally, when the International Mineralogical Association first approved it in 1971, the U.S. spelling was utilized, but several years later, the IMA chose to adopt the U.K. spelling "baryte." However, as sometimes is the case, many collectors and mineralogists living in the U.S. continue to spell the mineral "barite."

However, you choose to spell it, this mineral's uses are impressive in scale and longevity and matched by its popularity among mineralogists.