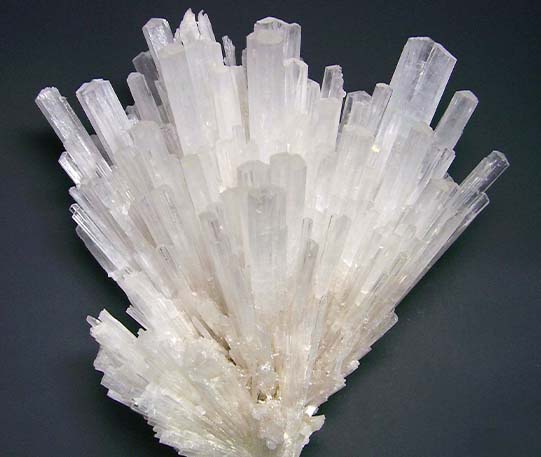 Natrolite is an example of a brilliant and brittle mineral. It may be a "handle with care" and a common type of its mineral family, but that doesn't mean it's "less than."

A member of the zeolite group, natrolite is an example of a mineral that is similar to but different from fellow minerals. The needle-like presentation of natrolite's crystal habits is like mesolite and scolecite. According to information at minerals.net, the similarity within the crystal habits of these minerals has scientists turning to chemical tests or optical assessment to identify natrolite from its fellow "needle zeolites" accurately.

Natrolite, a hydrous sodium aluminum silicate, often presents as white, colorless, or off-white, and on occasion, the crystals may appear yellow, pink, and even light orange. This mineral's environment is most often found to include cavities of volcanic basalt, seams within diabase and serpentine rock, and nepheline syenite pegmatites, according to minerals.net.

When it comes to natrolite, localities that share the honor of being among its homes include Tasmania; Khibiny Massif, Russia; Maharashtra, India; Somerset County, New Jersey; Mount Saint Hilaire, Quebec, Canada; and Bohemia, Czech Republic.

And, because I'm a bit of a spelling bee nerd, I looked at the composition of the word. Natrolite comes from the Greek origin of the word "natron," which is defined as a naturally occurring mixture of sodium carbonate decahydrate. The other part of the word natrolite is tied to "lithos," which means stone in Greek.

The photo of natrolite featured in this Mineral of the Week is from Mineral-Auctions.com. Do yourself a solid and check out the various auctions held at this site; the specimens are fascinating, and there are some great deals to be had as well.

How Do Super-Sized Geodes Get So Big?