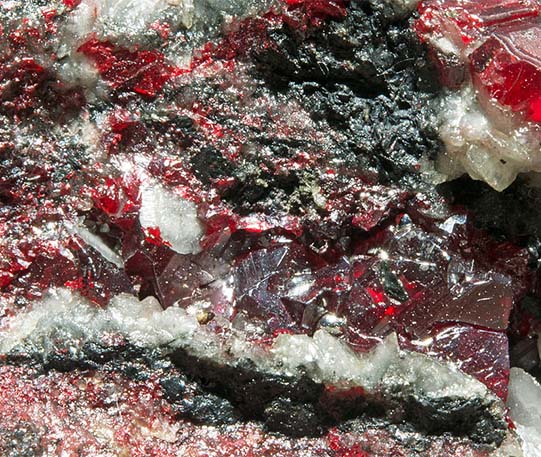 Mineral collectors know cinnabar, or mercury sulfide, for its bright-red, tabular or stubby prismatic crystals, which in many specimens contrast beautifully against white matrices of quartz or calcite. Cinnabar crystallizes in the trigonal system; it has a Mohs hardness of 2.0-2.5 and a high specific gravity of 8.0-8.5. As an epithermal (low-temperature) mineral, it occurs as hydrothermal veins, coatings, and fracture fillings in shallow volcanic and hot-springs environments.

Consisting of 86.22 percent mercury and 13.78 percent sulfur, cinnabar is the most abundant of the roughly 30 mercury-bearing minerals. It is also the only ore of mercury, a very dense, silvery metal that is liquid at room temperature and forms globular droplets.

Mercury’s biggest use has always been in the amalgamation recovery of elemental gold from ores and concentrates. Mercury alloys with gold to form a solid amalgam. Heating the amalgam easily separates the gold from the mercury, and the mercury vapor is condensed for reuse.

In modern gold-mining operations, cyanidation has entirely replaced amalgamation. But in artisanal gold mining, the mostly illegal, pick-and-shovel operations where production is untaxed and undocumented, amalgamation remains the most efficient and affordable method of gold extraction and recovery. And artisanal gold mining is big business in Latin America, Africa, and Asia, accounting for nearly one-fifth of the world’s annual gold production of 100 million troy ounces. 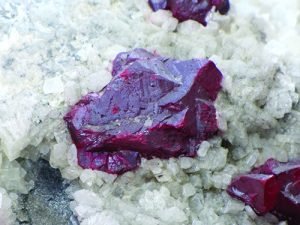 Unfortunately, mercury is toxic. When ingested, absorbed, or inhaled in sufficient quantities, the metal and its vapors and compounds adversely affect the nervous system, brain, kidneys, and embryonic and fetal development. Prolonged contact with various forms of mercury has caused physical and mental debilitation and even death among cinnabar miners, gold miners, and industrial workers. And releasing mercury into waterways, a practice common in artisanal gold mining, severely degrades the environment.

Many nations have recently restricted the import, export, mining, and use of mercury. Accordingly, the world’s documented industrial consumption of mercury has decreased by half. Yet paradoxically, the estimated mercury production from cinnabar mining has doubled to 2,480 metric tons per year.

The reason is that the boom in artisanal gold mining has generated a boom in artisanal cinnabar mining. Cinnabar is well-suited for artisanal mining. It occurs in small, but often rich, surface or shallow deposits that are easily and inexpensively mined. Simple heating in large retorts or wood-fired brick ovens quickly reduces cinnabar into elemental mercury that can be sold for cash to black-market middlemen who pass it on to artisanal gold miners.

Mercury is traded in standard, two-liter, steel flasks with a 76-pound capacity. At the current, near-record flask price of $2,000, a pound of mercury, which barely fills a shot glass, is worth $26—a huge incentive for artisanal cinnabar miners who live in poverty and have no other employment opportunities.

Dark Side of Cinnabar Mining

Artisanal mining accounts for as much as 80 percent of the mercury now produced annually worldwide. China is the world’s leading producer, thanks to the combined output of hundreds of small, illegal cinnabar mines.

Mexico ranks second with some 3,000 illegal miners producing an estimated 300 tons of mercury each year. Part of this production comes from the illegal reprocessing of old mining wastes in Mexico’s many historic gold- and silver-mining districts. Much of this recovered mercury is already amalgamated with silver that provides an additional profit.