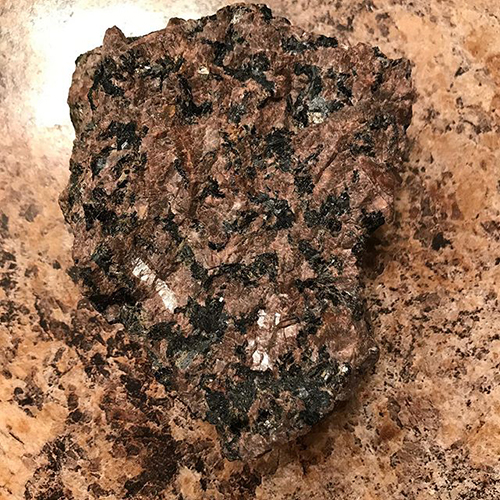 Editor's Note: This is a compilation of some recent of Thomas Farley, as he gathers materials for a book about rockhounding in the southwestern United States. We publish this material with Mr. Farley's permission.

One of the best thing about a road trip, even when you have a clear-cut destination in mind, is the freedom to stop and explore. It may be a place you've never been, or perhaps it's one of your favorite haunts, no matter. An enjoyable adventure of exploration doesn't require a set of rules to be deemed successful, as Thomas Farley has illustrated, the success of exploration is about being present in the moment, appreciate that which you interact with and surrounds you, and keep your eyes peeled for natural treasures.

During a recent visit to the area of Mountain Pass, California, Farley discovered a sizable example of the granitic rock syenite. He also stumbled upon a fascinating rock specimen near Wikieup, Ariz. that boasts striking lines of quartz. In addition, just the other day, Farley, found a few lovely examples of turquoise near Columbus, Nevada, during a fee dig at a turquoise and variscite claim. This trip was an arrangement Farley made through his regional rock club, the Southern Nevada Gem and Mineral Society.

In addition, he also visited Consolidated Rock & Mineral in Vacaville, Calif. It's one of his regular stops when he's in the area and has been since childhood. Regardless of how often he visits, Farley finds many exciting specimens in this happening rock shop.

Thomas Farley is sharing his adventures mostly via his Instagram feed these days, so check out his feed at @tgfarley on Instagram.

Malachite — Part II: Banded Beauty Comes from Russia and the...