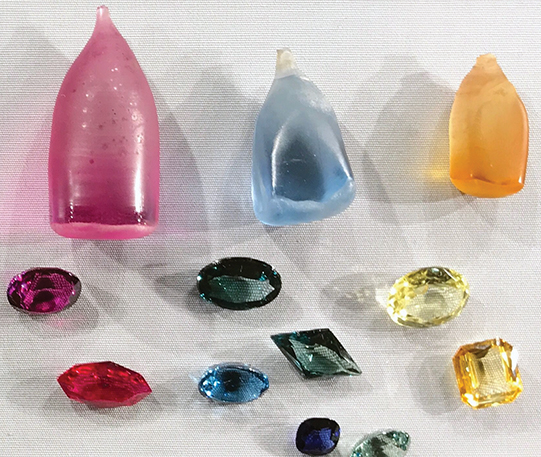 Medieval alchemists failed in their attempts to transmute common materials into precious ones. But as it turned out, their visions of transmutation, especially regarding rubies and sapphires were valid, albeit centuries ahead of their time.

The scientific feasibility of synthesizing rubies and sapphires did not become apparent until the late 1700s after mineralogists realized that these gemstones consisted not of mystical materials, but of certain forms of the mineral corundum (aluminum oxide, Al2O3).

The first step in creating rubies and sapphires came in 1817 when French chemist Joseph-Louis Gay-Lussac synthesized corundum by heating ammonium alum (hydrous ammonium aluminum sulfate). France then became a hotbed of research into corundum-gemstone synthesis. Chemists soon learned that pure aluminum oxide is colorless, but that traces of chromium impart the red color of ruby, while those of iron and titanium provide the blue of a classic sapphire.

By 1866, French chemists had developed a flame-fusion method of ruby synthesis by dropping particles of aluminum oxide and chromium oxide through a hot oxy-hydrogen flame. The molten particles collected below the flame and crystallized as tiny crystals of synthetic ruby. A succession of flame-fusion and flux experiments followed. While the results were sometimes encouraging, none produced synthetic gemstones large enough to facet and inexpensive enough to underprice natural gems.

Initially, Verneuil needed three hours to “grow” a 15-carat boule, each cuttable into eight carats of faceted gems identical in appearance to those of pricey, natural ruby, but far less expensive. In 1907, when Verneuil was growing two-foot-long ruby boules in eight hours, he opened a commercial laboratory and was soon synthesizing two tons of gem-quality ruby annually. When millions of carats of “Verneuil ruby,” then indistinguishable from natural stones, reached European jewelry buyers, natural ruby prices plummeted and a financial panic rocked the gem markets.

World War II redirected the focus of flame-fusion ruby synthesis from gems to scientific and industrial applications, mainly the manufacture of millions of tiny, mechanical jewel bearings for such precision instruments as chronometers, bombsights, and optical range finders.

Auguste Verneuil would undoubtedly be pleased to know that most synthetic rubies and sapphires are still created through the flame-fusion process that he commercialized more than a century ago—as would the old alchemists to know that their dreams of transmuting common materials into precious gemstones—albeit synthetic—weren’t so far-fetched after all.