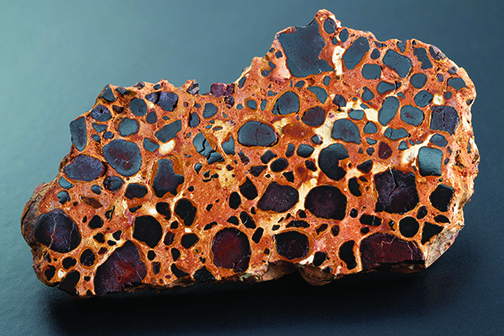 What is bauxite? It is the sole ore of aluminum (13th on the Periodic Table of Elements), the basis of a multi-billion-dollar-mining industry, and the second-most widely mined of all metal ores. Few mineral collectors own—or have even seen—a bauxite specimen. That’s because bauxite, a coarsely grained, loosely consolidated conglomerate with a muddied, reddish-brown color, is, well, a bit short on visual appeal.

What is Bauxite? - Properties

Bauxite is a sedimentary rock that consists mainly of the basic aluminum oxide mineral gibbsite [aluminum hydroxide, Al(OH)3], and the dimorphic minerals böhmite and diaspore [both basic aluminum oxide, AlO(OH)]. Lesser amounts of the iron oxides goethite [FeO(OH)] and hematite [Fe2O3] impart bauxite’s reddish hue. Bauxite is named for the French locality of Les Baux-de-Provence, where it was discovered in 1821.

Bauxite has a low Mohs hardness of 1.5-3.0, a dull, earthy luster, and low specific gravity of 2.0-2.5. Bauxite forms in moist tropical or subtropical climates when the aluminum-silicate minerals in clayey soils are leached and converted to basic oxides. Typically large and shallow, bauxite deposits are eminently suited for inexpensive strip mining.

Aluminum, the most abundant metal and the third most abundant element in the Earth’s crust, was isolated in 1827. Strong, lightweight, workable, corrosion-resistant, a good conductor of heat and electricity, and easily alloyed with other metals, aluminum’s industrial and metallurgical possibilities seemed boundless.

Extracting aluminum economically, however, was a big problem. The most common aluminum-bearing minerals are silicates, but their tightly bound molecules make processing costly and difficult. Bauxite, which contains about 25 percent aluminum in the form of more easily processed basic oxides, had far greater potential as an ore. By the mid-1800s, metallurgists had learned to inexpensively convert those basic oxides to alumina [aluminum oxide, Al2O3].

But the next step—electrolytically reducing alumina to metallic aluminum—was prohibitively expensive because alumina had to be melted at the very high temperature of 2,000 degrees F. As long as aluminum remained unaffordable, the huge bauxite deposits that had been discovered around the world, mainly in the tropics, had no value.

What is Bauxite? - Hall-Héroult Process

Then, in 1866, two 22-year-old chemists, Charles Martin Hall in the United States and Paul L. T. Héroult in France, found that alumina dissolved readily in molten cryolite [sodium aluminum fluoride, Na3AlF6]. Because cryolite melts at just 1,000 degrees F., the overall cost of producing aluminum by electrolytic reduction was dramatically reduced. As one of the landmark technological breakthroughs of the 19th century, what soon became known as the Hall-Héroult Process made possible the commercial production of aluminum.

Bauxite has since become an indispensable mineral commodity. After mining, it is crushed, ground, mixed with caustic soda, and heated in pressurized vats to convert the basic aluminum oxides to alumina. Then, using the original Hall-Héroult Process, the alumina is dissolved in molten, synthetic cryolite and electrolytically reduced to metallic aluminum.

Today, 300 million tonnes of bauxite are mined worldwide each year to yield 60 million tonnes of aluminum, made into everything from aircraft components and electrical transmission lines to beverage cans and kitchen foil. Fortunately, bauxite is so abundant that the world’s ore reserves will last at the current mining rate for several centuries. Bauxite is currently valued at $40 per tonne, alumina at $400 per tonne, and metallic aluminum at $1,710 per tonne.

While bauxite does not attract much collector interest, its unusual pisolitic structure and coloration are nevertheless interesting. The better specimens are polished to show off their dense, pisolitic patterns of dark, reddish-brown concretions against a lighter matrix. Polished bauxite specimens are sometimes available at gem and mineral shows and online. While they will not be the most eye-catching specimens in a collection, they represent one of the greatest of all metal ores.

This story about what is bauxite previously appeared in Rock & Gem magazine. Click here to subscribe! Story by Steve Voynick.

Seize the Day in Rockhounding