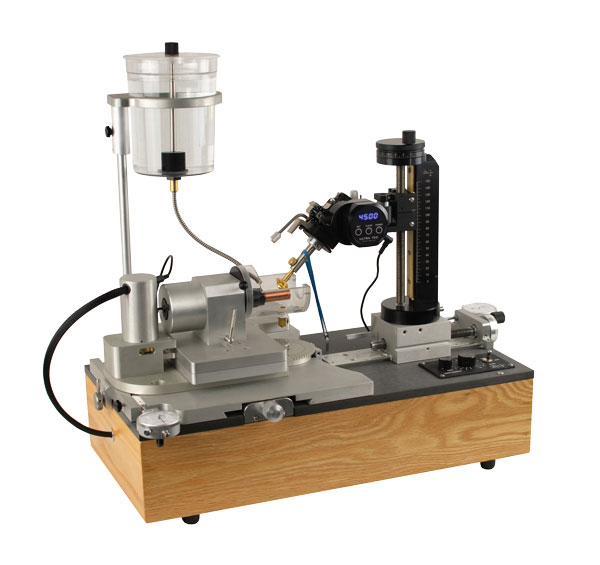 “Someone with that artistic eye will find some way to express it,” he says. “There are very different things you can do to change a stone, but of course, the artistry comes into it.”

When people invest in an ULTRA TEC faceting machine, they have the tools they need to express their creativity in this medium. “You are creating something you can show off to your friends and maybe even something you can sell,” says Tim. ULTRA TEC is an American company with an American product, that is proud to have supported both hobbyists and topnotch professionals throughout the world for 57 years. With a track record of quality and customer attentiveness, their machines allow lapidary artists to express their unique styles while turning rough stones into art.

Worcestershire, United Kingdom - Tara Coomber was always drawn to the intricacies of nature. Growing up on a small island, she spent most of her childhood on a nearby beach. The shells and pebbles captivated her.

“I’m naturally drawn to detail, and would sit in one spot sifting through them,” Tara says. “I was fascinated with finding things that were so perfect out of a chaos of millions of pebbles.” She spent hours drawing the stones and shells building the foundation for her artistry and becoming a “rock star” in her own right.

Tara’s path began by graduating in 1988 from the School of Master Jewellers, Birmingham with a Bachelor of Arts with honors in Silversmithing & Jewelry. Despite creating pieces for international exhibitions and acclaimed museums, she gravitated toward those pebbles.

“To create something of beauty out of something so raw is an exciting process,” she says. “Every gem has a unique story.”

As a jeweler, she felt some of her designs were limited to the stones on the market so she taught herself to cut gems. She even fashioned her own equipment for many years before investing in the ULTRA TEC V5 Classic.

“Now I have the freedom to create endless possibilities,” Tara explains.

Breathing Life Into Her Vision

When working with a stone, Tara might shape it according to how she wants the piece of jewelry to look.

“Other times, I automatically can see how a piece of rough (stone) will become. And sometimes —and most interestingly— the stone decides for itself,” Tara points out. A stone might behave a certain way as she begins to shape it, or she works around fractures or inclusions. Although, she notes, “Sometimes it’s nice to keep the inclusions as this helps speak the stone’s story.”

ULTRA TEC FACETING MACHINES - Matching the Machine with the Artist

When an artist has the proper tools, it’s easier to translate an idea into a reality. For Tara, her choice of the ULTRA TEC V5 Classic gives her this latitude.

“I love it! Not only do I believe it is the best precision faceting machine on the market for its accuracy and ease of use, but it is a work of art in itself. There is an attention to detail on every aspect of its features. I feel at home sitting by it just looking at how lovely it is. It gives me so much pleasure,” she says.

For those just starting this journey, Tara shares a few pieces of advice. “I’d say you need a lot of time and patience when getting started. There’s so much to learn in technique, technicalities and the science behind it all, especially in precision cutting, but persevere.”

Walnut, California & Taiwan - Since Chen “Jack” Jong Chong’s first introduction into gems looking for emeralds in Columbia nearly 20 years ago, he’s been on a mission to hone his craft and share his knowledge. He’s earned multiple first-place awards with the United States Faceters Guild and is actively educating the next generation of gem enthusiasts.

Finding the Best Tool for His Trade

Jack quickly realized he made the right choice. “I love the whole machine, but of course, the mast is the heart of the machine. It is the pride of ULTRA TEC. The ULTRA TEC V5 Faceting Machine meets all of my needs when I do gem faceting. I can quickly position the mast, quickly calibrate the index vernier, and quickly set up angles. The Digital Angle Dial (DAD) is very precise up to two decimal places. And the best thing is I can calibrate it myself if it is needed. I can always be precise and ready for my next faceting,” he said.

Reaching Beyond the States

Jack’s goal is to share his knowledge with everyone. Starting in 2020, he taught six students who completed his advanced gem faceting courses. He said four of them now use the ULTRA TEC V5 Faceting Machine.

With multiple awards and continual improvement in his craft, his students are in good hands. “When I first participated in the USFG SSC, I thought it was a good way to verify my faceting techniques. I set up my goal as simple as just to do the best I can,” Chen Jong comments.

His enthusiasm in teaching and utilizing the ULTRA TEC V5 Faceting Machine in his work inspired him to reach bigger audiences by participating in the Taiwan Mineral Show and Taiwan Jewelry and Gems Exhibition, creating a Facebook page named “Faceting Fun” and founding “Jack’s Gem Studio” in Taipei City, Taiwan to teach gem faceting.

Graeagle, California - Sometimes life throws a curveball and we have to adjust. This was the case for Nolan Sponsler, who was studying exercise physiology as a collegiate baseball player. During an armed robbery at his apartment, he was shot at twice and witnessed the shooting of his roommate. After this, he needed time to heal. During this healing, he discovered a new calling.

Discovering a Passion through the Pain

Nolan says he dropped out of school to wrestle with severe anxiety, yet needed to work, so he became an apprentice in a jewelry store. When he was in a healthier place mentally, he embraced his newfound passion.

“I found through the medium of jewelry and gemstones I was able to express my creativity and work toward building skills in ways that as a baseball player I wasn’t able to,” he explains.

He delved into cutting stones after taking a private class with Hashnu Stones & Gems in 2018. “He had me out for a three-day session where I faceted a citrine and did fantasy cut on the girdle. I wasn’t sure if it was going to be something I’d like to do, but after those three days, I fell in love with it. I knew I had the brain for it,” Nolan says.

Nolan invested in the equipment he needed to continue his newfound path by purchasing the ULTRA TEC V5 Classic as his foundational machine.

“I love it,” he says. “The digital angle dial is great and it’s very accurate with indexing.”

With the Fantasy Machine, artists can sculpt aspects of the stone and add specific features. “I like using the Fantasy Machine because it provides four axes for a tool to travel — East/West and North/ South — and the mast can be moved up & down. The tool holder can be set at precise angles and moved in a straight line. And the machine has a reciprocating motion that is beneficial for concave facets.”

For those interested in gem cutting, Nolan says there is a myriad of online resources. “Also, do not get too caught up on getting everything perfect when you’re just starting. It’s okay to make mistakes because that is how you learn,” he said.

Nolan’s journey was far from smooth, but it’s exactly where he belongs. As he says, “If one has a strong enough reason why, one can bear almost any how.”

County Mayo, Ireland - Going from an underwater videographer to working with steel and as a gem cutter, Andrew Stuart muses, “A wise man once said that life happens while you are busily making plans.” With curiosity and willingness to learn, Andrew utilized his talents to merge his creativity into a new career.

Call of the Wild

Andrew was always fascinated by the natural world. After finishing school, he earned his divemaster certification and taught diving. In Australia, he picked up a video camera for the first time.

“Video bought the underwater world to life,” he says, which inspired him to attend film school when he returned to Ireland and “dive” into a career as a filmmaker. But a growing family called for less travel and a career change.

“I found myself back working in a steel workshop grinding and polishing stainless steel after 20 years of adventures on the high seas,” Andrew says. “It’s safe to say I was not best pleased with my new career. But I did find it oddly satisfying to get a perfect polish on a 10-foot-long, 250-kg slab of stainless steel. I remember having the thought, ‘I don’t mind the polishing bit. It’s all the grinding and lifting that sucks.’ Well, as luck would have it, adventure was not far away.”

While living in his wife’s native Japan, YouTube was a distraction between teaching English classes. “Down the YouTube rabbit hole I went and stumbled across some gem cutting channels,” he says.

“That was it. I had to try it. So I ordered the ULTRA TEC V5 and some cheap rough stones, started studying gemology online through Gem-A, and began to teach myself to facet through books, YouTube videos and some good old-fashioned trial and error,” he said.

He decided on the ULTRA TEC machine after lots of research. “I wanted the best, most reliable, most reputable and, above all, a good after-sales service. There have been many good faceting machine manufacturers that went out of business leaving gem cutters struggling to find parts or having to make a hefty investment in a new machine. I wanted to avoid that, too.”

“My favorite feature of the V5 is the DAD. You know exactly what angle you are on, and when you need to return to a facet, you don’t mess up your meet points by being off a fraction,” Andrew says. “I hope in the future to buy ULTRA TEC’s Fantasy Machine to explore the wonders of concave faceting.”

Bench Tips: Getting the Best Pattern

Why Are There Fossils in the Rocky Mountains?