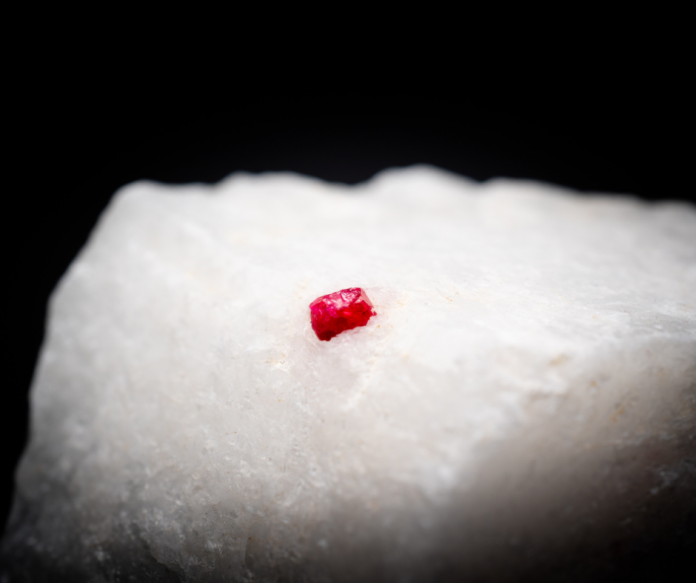 Spinel (magnesium aluminum oxide) forms beautiful crystals that are sometimes confused for the brilliant-red gem variety of corundum known as ruby. Unlike rubies, which form as hexagonal crystals, spinel crystals are often found as octahedrons. Also, two crystals may grow together as triangular plates in a form of contact twinning. This happens so frequently with spinel that such crystals are formally called “spinel law twins” whatever mineral they occur in.

While many collectors prefer the luscious red variety, spinel also can be black, green, blue, lilac, orange-brown, pink or white. All have a glassy luster and are very hard with a Mohs ranking of 7.5 to 8.

Red and lilac varieties may fluoresce, such as those from the Sterling Hill Mining Museum, a brilliant red or yellow-green under ultraviolet light. Spinel is one of a series of closely related mineral varieties that depend on the amount of magnesium present.

Spinel is often found in such metamorphic rocks as calcareous gneisses and marbles (sometimes in association with ruby corundum), as well as in plutonic rocks such as gabbro. It’s also found eroded from its host rock in alluvial (river gravel) deposits.

In the United States, spinel is common in the metamorphosed limestones of the New York-New Jersey highlands belt. Myanmar, Sri Lanka and Madagascar provide significant amounts of gemmy spinel for use as gemstones to be set into jewelry.

A famous crown jewel of Great Britain, the Black Prince’s Ruby, is actually spinel! Like corundum, spinel can be synthesized by what’s called the Verneuil method, and many common synthetic gemstones are spinel. By adding different pigmenting elements, labs have been able to produce varied colors, thus allowing for spinel to be used to synthesize lookalikes for such gemstones as sapphire, aquamarine or peridot.