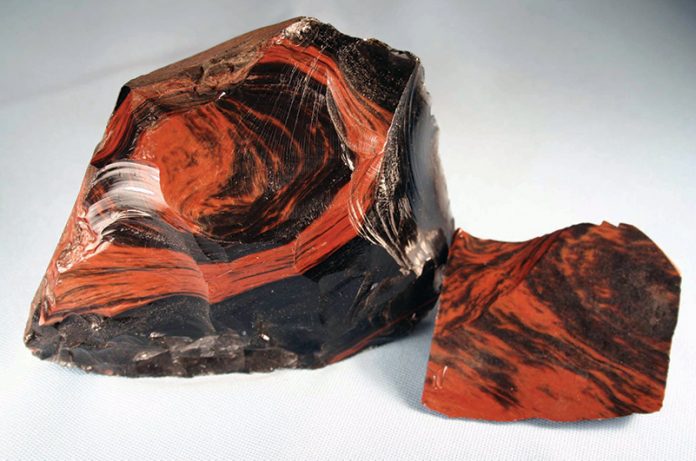 Obsidian is a volcanic glass that’s formed when molten lava cools suddenly. Is it a mineral? The answer lies in how it’s formed.

Normally when lava flows, it ends up as thick layers of solid rock. Its layers are dense, seldom revealing any crystals. Depending on its gas content, the hardened lava can be vuggy meaning it contains pores or voids. Under the right conditions, we can find gem agate, fire agate or even mineral crystals. Under other conditions, it can be vitreous, glassy and gemmy. 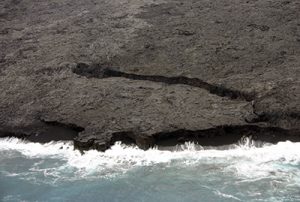 There are two major types of lava based on their mineral content and chemistry — mafic and felsic.

Mafic lavas are dark, dense and made primarily of dark iron and magnesium minerals but are low in the lighter elements that make up the silica minerals and rocks. Basalt is a common form of mafic lava.

Felsic lavas are just the opposite, high in silica and low in iron and magnesium minerals. They are composed of quartz and feldspar so they are lighter hued. Rhyolite rock is a prime example of high silica lava.

Lava that’s high in silica tends to be viscous, move slowly and develop thicker, solid flows. This inhibits atomic diffusion, the movement of molecules needed to form crystals. Mafic lava is more fluid and, when hot enough, flows almost like a river. You see this in the lava flows of Hawaii that flow rapidly spreading over the land often solidifying on the surface and continuing to flow underneath the new crust. 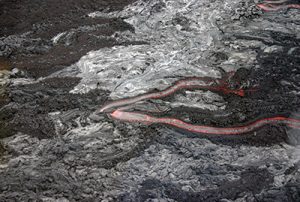 These two basic types of lava can produce what we call obsidian, but true obsidian forms from felsic lava cooled rapidly. Mafic lava can form what is called basalt glass which is dark and forms as a lining of vesicles or gas pockets and around the edges of flows where air can cool the material more rapidly.

Basalt glass tends to be relatively small whereas obsidian formed from felsic lava can occur in huge layers. A prime example of this is Obsidian Cliffs in Yellowstone National Park, a flow that was exposed by road building and is many feet thick of solid obsidian.

The composition of felsic lava is primarily silica. When it cools rapidly in contact with water, and even air, the mineral crystals usually cannot form. So, true obsidian is not a mineral but a glass. Anyone who has seen objects made of obsidian knows it is always glass-like, dark and clear. It comes in several different forms that are attractive and of interest to lapidary artists who enjoy the challenge of working with a substance that has a high conchoidal fracture property. It is brittle but can be lustrous and beautiful. 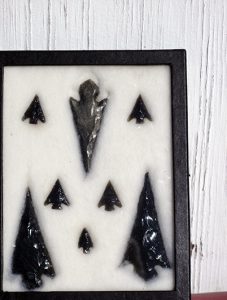 It was undoubtedly the conchoidal fracturing of obsidian that brought it to the attention of early humans. Like glass, when obsidian breaks, the pattern that forms is a curving shell-like surface that is razor-sharp.

This was obviously of great use to early hunters who could make sharp weapons or tools including knives. Broken obsidian will have sharp edges so it did not take long for humans to figure out they could strike the edges of an obsidian piece to make their tools.

Eventually, people learned that applying steady pressure along the edge of obsidian would achieve the shape and sharpness they wanted to produce. Today we call this knapping and at some shows, artists demonstrate the art of knapping. 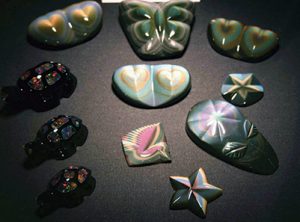 Obsidian usually appears black or gray but it is not always glass clear. By the nature of the material, lava tends to be fine-grained which contributes to its dark color but inhibits crystal growth. Obsidian is largely amorphous or non-crystalline but it will often develop tiny sub-microscopic spherules or mineral grains. These tiny spherules of crystals, depending on size, create a variety of useful obsidian.

One of the more popular types of obsidian is called snowflake obsidian. This dark obsidian has what appears to be very small flower-like spherules of minerals. Time and a slower rate of lava cooling, allow some crystal molecules of silica to draw together to form micro-crystal clusters of the mineral white cristobalite, a form of quartz. Lapidary artists use snowflake obsidian to create domed cabochons, ring stones and pendant stones.

Mahogany obsidian has curving ribbons of brownish color running through the darker gray-black obsidian. Though felsic lava is mostly silicates, it contains some iron minerals like magnetite and hematite. The iron present can develop a brown color that’s basically an iron oxide akin to hematite. The iron oxide may form on the surface and get mixed in as the lava flows.

The result is obsidian with banded, striped or curving patterns of brown to yellow. This type of obsidian on the market today comes from one area on Mount Andreas in the State of Jalisco, west of Mexico City. This obsidian deposit is among the largest in the world and the obsidian offers a variety of mineral species with sub-microscopic crystals in it.

Rainbow obsidian is the most colorful obsidian and has become popular in the last two decades or so since entering the market. It is highly prized for making jewelry and carvings of banded and color-zoned objects like turtles, butterflies or domed hearts. When polished, the colors are almost intense with a beautiful rainbow effect.

When a layer is dominated by one particular mineral you may see just one color, so each piece of rainbow obsidian that is cut will vary in color and pattern. Obsidian can have other minerals in it like pyroxene, plagioclase, hornblende, mica and various feldspars. Each of these plays a role in causing the colors we see in rainbow obsidian resulting from the refraction of light that enters the obsidian. (Another mineral, hedenbergite, coupled with gas bubbles causes the brownish, silver or golden image in sheen obsidian.)

In Arizona, an interesting form of obsidian is found - small rounded pebbles lodged in the mineral perlite formed from the glassy remnants of obsidian that has absorbed water and decomposed. These are called Apache tears.

Apache Tears are found in many places in the Southwest; Arizona, New Mexico, Nevada and Utah. The New Mexico deposit is a huge open-pit industrial operation in the mountains just west of Socorro. You can see it from the highway driving from the Kelly mine to Socorro.

Arizona’s Apache Tears occur in a huge deposit of perlite within easy reach of Highway 60 into Superior and the Magma mine. The deposit has been open to collectors for a fee for years. It is located near the base of a high cliff and it is here the legend of Apache tears was created.

The legend has it that Apache Braves battled with the US Army cavalry but were about to be defeated. Instead of surrendering, the warriors that were still mounted chose to ride their horses off the high cliff to their deaths below. Since that time, the cliff has been known as Apache Leap.

When the Apache women saw their dead braves at the base of the cliff they wept and wept and as their tears fell, the drops turned to stone. These small rounded black spheres of obsidian are now known as Apache Tears.

Field Trip Focus: Making Memories and Discoveries As a Club