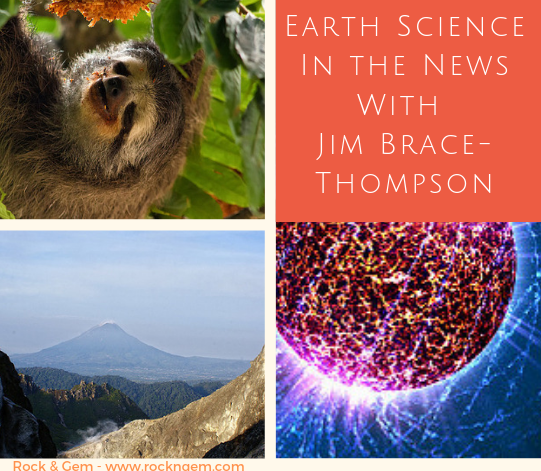 Indonesia is home to about 130 of the world’s most active volcanoes, and one of those is acting up yet again. After lying more-or-less dormant for some 400 years, Mount Sinabung in Karo regency of North Sumatra, Indonesia, has shown a decided spike in activity within the past decade.

Most recently, the 8,070-foot stratovolcano sent a column of ash 6,500 feet skyward on May 7. Then on June 9, it began spewing ash 22,966 feet into the air, along with a pyroclastic flow down its southern flank. The resulting gas, ash, and smoke prompted government officials to issue alerts urging area residents to don face masks and to stay indoors so much as possible.

Some of these past eruptions caused mass evacuations, power outages, and local crop failures. While there were a few deaths during these past events, monitoring, evacuations, and relocation efforts have fortunately helped limit fatalities, and no fatalities have been reported with the most recent eruptions although it’s feared the new ash falls will once again hurt crops in area plantations.

Slothful Evolution Appears to be Anything But!

grows in their fur as they lead a life hanging upside down in warm tropical trees of Central and South America. This has earned them what I consider to be a bum rap. For instance, according to Merriam-Webster’s online dictionary and thesaurus, to be slothful is to be indolent, idle, lazy—shiftless, even!

Theories of evolution have varied about pace. Some contend that evolution happens very quickly, particularly within isolated populations. Others say, hold on! Evolution is a slow, slow process. Slothfully slow, in fact. However, sloth evolution appears to be anything but. In fact, nearly 60 species distributed among 8 families have been discovered in the sloth family tree.

And, per a study released in 2014, sloths show one of the fastest evolutionary rates of increase in body mass known among mammals. Not so bad for a slothful kind of guy!

Today, we have two modern sloth genera—Choloepus (two-toed) and Bradypus (three-toed)—and six species. Full-fledged sloths first appeared in South America 60 million years ago after the dinosaurs had come and gone, and some contend that the slothful order may actually have begun 100 million years ago.

Relatively quickly, sloths morphed into all sorts of weird and wonderful forms. In contrast to today’s sloths, most fossil forms were ground dwellers and, four million years ago, one dubbed “the marine sloth” was a moose-sized ocean-going gal with a long snout and long claws to dig up food from the seafloor. Another was a meat-eater who would have had to have quick reflexes to catch dinner on the fly. During the Ice Ages, a giant ground sloth called Megatherium stood 6 meters tall and weighed more than an elephant.

In short, the sloth family tree presents a pretty impressive and varied bunch of critters!

Most recently, scientists have rewritten this family tree using ancient DNA. Per articles in June issues of the journals Current Biology and Nature: Ecology & Evolution, two independent studies show that today’s three-toed sloths are related to relatively recent Megatherium and Megalonyx while today’s two-toed sloths are direct descendants of the last of the ground sloths, Mylodon from South America.

These studies upend earlier theories by showing that today’s sloths branched off from one another much more recently than earlier theories contend. These and other studies show that evolution need not be so slothful, after all!

Got Gold? Then Thank Your Lucky Stars!

Humans have long held dear the mineral called gold that glitters like distant stars. In fact, scientists now say, that may indeed be where our gold came from.

For some time now, per a report in a recent issue of Science News, astrophysicists have theorized about the so-called “r-process.” They believed that when two neutron stars collide and merge, the resulting extreme cataclysm could set off a chain reaction resulting in creation of heavy elements such as gold, platinum and uranium.

In fact, this was confirmed in a paper published in 2017 reporting on an observed collision between two neutron stars that reportedly spewed out a soup of heavy elements. Below is an artist's impression of a black hole devouring a neutron star. The video is courtesy of Dana Berry, Wikimedia Commons.

Now, Brian Metzger of Columbia University and colleagues say this same r-process is initiated by massive stars collapsing into black holes. Called “collapsars,” they blow off a so-called wind rich in just the right materials to create our heavy elements. In fact, Metzger and his team contend that as much as 80 percent of r-process elements in the universe may be the result of collapsars, with the rest coming from neutron star mergers.

So, if you want more gold while digging in the dirt and panning rivers and streams, take a moment to pause, look up to the heavens, and thank your lucky stars!