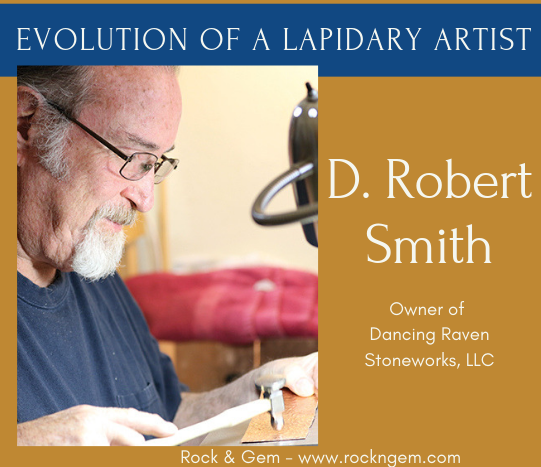 Editor's Note: The 'Evolution of A..." profile is a new column featuring people with various rock, gem, mineral, fossil, and lapidary related careers. The stories focus on each person's journey in their field of interest. We begin with lapidary artist D. Robert Smith, owner of Dancing Raven Stoneworks, LLC.

Inspiration is at the core of how artists create and who they are. For some, like D. Robert Smith, after decades of forging a creative path, they may find themselves (happily) returning to their roots, in many ways.

Smith’s roots include an intriguing lineage of artistic influence, nearly 60 years of experience in the rock, gem, and mineral world, and completion of more than a quarter-million pieces of lapidary jewelry. And while he has formally “retired” from an in-shop studio setting at least once, he has no plans of leaving the bench for good. As he explains it, his career continues to “morph.”

“I’ve spent most of my life in the mineral business – since I was about 12,” said 67-year-old Smith, who lives in Durango, Colorado, and retired to take a four-year hiatus for medical reasons between 2012 and 2016. “When I restarted my business [in 2016], I made a conscious goal of doing things differently. To get back to the basics and re-educate me. I’ve come full-circle, in a way.”

Getting Back to Roots

Today he sells his jewelry, polished stone, and other inventory at select shows and by way of the online site of his business, Dancing Raven Stoneworks, LLC at www.dancingravenstoneworks.com. Spending most of life living in the West and Southwest, Smith describes much of his hand-made work as having a contemporary Rocky Mountain Western feel. He has decades of experience in jewelry repair and restoration as well, but it’s not the bulk of what he’s seeking to do in this phase of his creative journey.

“I believe if you pay attention to what is around you and what you look forward to doing, what you do as an artist will tell you where you will go next,” Smith reflected.

There are many themes that could apply to this Tucson-native’s life journey, but that statement above might be most accurate. He’s been paying attention to what is around him since childhood when he was first introduced to rockhounding. As a child, whenever he and his family would travel anywhere that had a rocky terrain, there was an effort to take time to dig for rocks. More than once, the floorboard of the family’s vehicle would be lined with the rocks found by Smith and his siblings.

While discovering the thrill of rockhounding as a child isn’t necessarily unique, for this fourth-generation artist, the years preceding certainly leaned more toward uncommon and, we’d dare say, fascinating.

At the age of 8, Smith participated in his first Tucson Gem and Mineral Show. To be fair, he was a member of a local Tucson Boy Scout troop and their job was to set up the tables for the vendor booths at the show. This was in the early 1960s, about five years into the Show’s operation, and it opened his eyes to the magnitude of the world of minerals, gems, rocks, and lapidary.

Although early on his focus admittedly was minerals, the opportunity to learn at the bench of an icon opened the door that much further. 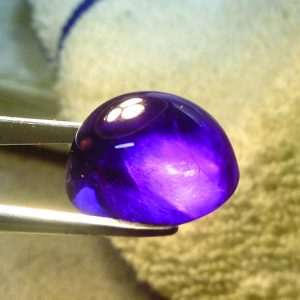 “I really started to learn about cutting stones with James Moody when I was around 10,” Smith said, reflecting on time spent with the co-founder of the Tucson Gem & Mineral Show, a friend of Smith’s father. “I learned so much from Jim, and still today my process centers around the stone, as he taught me. I like simple designs, where the stone is the focus and I work from there out.”

The interest in cutting stone and incorporating stone into jewelry began as a hobby for Smith, but in reality, it was a business in the making. Over the years he studied and learned various skills of the jewelry trade from a variety of people, including noted experts such as Merle Stookey and Michael Durkee. Each step in the journey has helped shape his knowledge, appreciation, awareness, and respect for the rock, gem, mineral, and lapidary world and those it attracts.

“Over the years I’ve had some wonderful and interesting mentors and a lot of sound influence,” Smith said. “It really started with my family.”

As stated earlier, he is a fourth-generation artist, and his lineage aptly reflects

the interesting influence he speaks of. Smith’s great-grandfather and grandmother, who became his adopted mother, were both artists (Samuel L. Camp was a mural, billboard, and landscape artist during the Great Depression, and H. Irene Smith (Camp) was a respected wildlife and landscape painter, among other accomplishments). His step-grandfather, Donavan Smith, who became his adopted father, was a master gas and arc welder, who taught him skills of working with wood and metal to create artistic pieces. Plus, his biological mother and father were skilled in writing, beading, and carpenter, respectively.

The creative and inquisitive spirit passed on from his family remains at the center of Smith’s work today. Part of getting back to the roots of his approach to jewelry-making involved purchasing new-to-him tools and equipment, Smith said. A big part of that has involved exploring new technology and machinery and sharing ideas and opportunities with fellow lapidary jewelry artists.

“There are some really nice machines out there, and people are doing incredible things with those machines,” added Smith, who recalls the early years of working with sanding blocks and sandpaper on stones. “I’ve also learned over the years that business is better when we share our ideas, as well.”

Grateful To the Core

As he continues to create new pieces, discover new material, travel and sell at shows, and remain a student of his craft and life, Smith points to having a grateful heart as key.

“I’ve been fortunate enough to experience many things, meet many wonderful people, and have been blessed in many ways. I keep using what God has given to me to give a little beauty back to others.”

What to Cut: Glacier Ice Agate