Common opal colors lack the glittering, multicolored opalescence of its precious counterpart, but it is nevertheless a beautiful gemstone with its own unique qualities.

Both the common and precious varieties of opal consist of hydrous silicon dioxide.

Despite having a composition similar to that of quartz (silicon dioxide), opal’s properties are much different. Because of its attached molecules of water, opal is substantially softer, more brittle, and less dense than quartz. Most importantly, unlike quartz, common opal does not form crystals.

With its amorphous structure and variable chemical composition, all forms of opal are classified as mineraloids—natural, mineral-like materials that do not meet all the qualifications of a mineral. But because opal was historically classified as a mineral, the International Mineralogical Association recognizes tradition and continues to list it as a valid mineral species.

Opal is a solidified, colloidal silica gel with an amorphous structure consisting of randomly arranged, interspersed layers of hydrated silica molecules and microscopic spherules of anhydrous silica. The opalescence of precious opal is created when layers of microscopic silica spherules diffract white light into its component colors. When reflected, these diffracted light waves become reinforced to produce the phenomenon of optical interference and the iridescent colors seen in precious opal.

Common opal either lacks silica spherules or consists of spherules that are too large or too small to create opalescence. Although lacking opalescence, common opal has varying degrees of translucency and scatters light internally to produce a soft, warm glow similar to that of moonstone.

Non-gem-quality common opal is fairly abundant and occurs as fracture and seam fillings, grain cement in sedimentary rocks and even as opalized wood.

Precious opal is by far the rarest variety of opal, followed by gem-quality common opal.

The best-known and most valuable type of common opal is fire opal; its rich, orange-red color is caused by microscopic inclusions of hematite. In describing opal colors, “fire” can refer to the opalescence of precious opal or to the orange-red color of common fire opal.

In terms of both quality and quantity, the best fire opal comes from central Mexico.

Because of its unusual degree of transparency, Mexican fire opal is usually faceted, while all other types of common opal are cut as cabochons. Mexican fire opal occasionally exhibits subtle flashes of greenish-yellow opalescence because of partially formed, silica-spherule layers that diffract and reflect only part of the incident light.

The only truly transparent common opal is hyalite, in which subtle hints of greenish-yellow are caused by traces of iron. 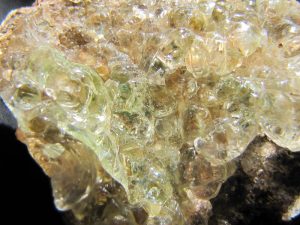 Peruvian pink opal, a rare example of organic coloration in gemstones, consists of a mixture of hydrated silica, chalcedony, and palygorskite, the latter a complex hydrous magnesium aluminum silicate. Palygorskite’s fibrous crystals have a strong affinity for organic molecules.

The pigments in Peruvian pink opal are reddish-colored quinones, hydrocarbon compounds that originated as ancient plant materials in a now-buried lake bottom within a basaltic environment. With an abundant supply of magnesium from the basalt, palygorskite formed, attached quinone molecules and became part of the silica gel that solidified into Peruvian pink opal.

Peruvian blue opal, characterized by its blue-to-blue-green color and soft translucency, comes from an old copper-mining district in southern Peru. Its unusual color is produced by microscopic inclusions of the copper-bearing mineral chrysocolla.

Milky opal, not to be confused with white precious opal, is the most abundant type of gem-quality common opal. It has an off-white color, a moonstone-like translucency, and a warm glow caused by the internal scattering of light. The presence of iron often produces soft, bluish or orange undertones. Milky opal is fashioned into beads and cabochons.

Prase opal’s distinctive, chrysoprase-like green color is caused by a nickel chromophore. The dark, spiderweb-like patterns of dendritic opal are created when black manganese oxides fill tiny fractures in the crazed (fractured) opal surface. Multicolored, banded opal, which has only limited translucency, forms from variations in the chemical composition of silica gel during the solidification process.

So while precious opal may always rule the roost in the opal hierarchy, common opal is nevertheless a fine and distinctive gemstone—even without opalescence.

What to Cut – Fossil Ammonites