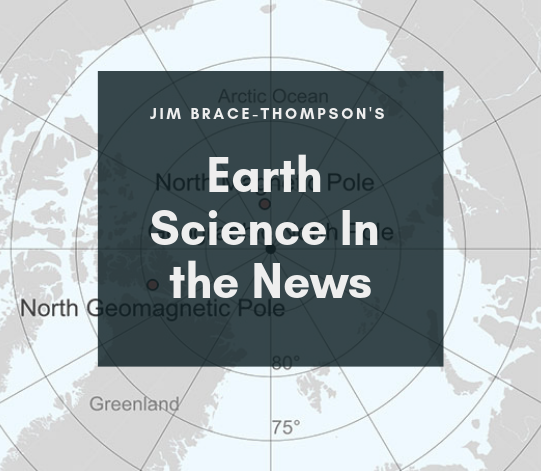 On February 4, a new “World Magnetic Model” was released showing that the magnetic north pole has been wandering at an increasingly fast clip. In the mid-1900s, it was wandering at a rate of less than 7 miles a year, hovering over the Canadian arctic. But since the year 2000, the pole has shifted an average of 34 miles a year! It is now centered in the Arctic Ocean, 4 degrees south of geographic north, and is headed for Siberia.

Although the changes affect cellphone GPS systems, Google Maps, and military navigators, the practical impact to most Earthlings is negligible—unless you have a need to navigate very precisely up in the Arctic.

Earth’s magnetic field is generated by its liquid iron outer core which circulates around the solid iron inner core deep beneath our feet as Earth spins on its axis. But the liquid core swirls and surges and “sloshes” a bit, and thus the magnetic field wanders. In fact, every 200,000 to 300,000 years or so, it not only wanders but completely flips, with the magnet north pole becoming the magnetic south pole and vice versa. Some say we are long overdue for a reversal. (The last one occurred some 780,000 years ago.)

Does the increasing pace of our wandering pole presage such an event? Stay tuned!

If you’re an arachnophobe who finds it hard to sleep at the thought of the many spiders inhabiting your abode, fossil-collecting high school student Kye-Soo Nam discovered the stuff of nightmares: 112 million-year-old spider eyes that still glow from within the rock that entombs them!

The fossil in question—from the Lagonomegopidae spider family—was found in the Lower Cretaceous Jinju shale formation of South Korea and was described recently in the Journal of Systematic Palaeontology.

Spiders have a canoe-shaped structure within their eyes called the tapetum, which reflects light. Such reflective eyes are particularly useful for spiders that are night hunters. This is the first time this structure has been found preserved in the fossil record of spiders, a record that includes 1,000 known species and that extends back as far as 420 million years to the Silurian Period. Sleep well, arachnophobe, secure in the knowledge that at least the critter that sports these glowing eyes is long dead and firmly ensconced in stone.

For several years, exoplanets have been all the rage. These are planets orbiting stars far beyond our solar system. Scientists only recently have been able to detect them based on faint changes in light collected by telescopes. Such changes indicate something is passing between us and a distant star.

Thanks to ever more powerful telescopes on Earth and in space, we are finding a true bumper crop of exoplanets. And thanks to ever more sensitive analytical techniques, we are able to glean suggestions of just what conditions on these distinct planets may be like.

The bumper crop is sure to increase greatly thanks to what’s being called “the next generation exoplanet hunter,” namely, NASA’s Transiting Exoplanet Survey Satellite, or TESS. TESS is a satellite designed to replace the now defunct Kepler space telescope. Launched last April and beginning its sweep of the skies last July, TESS has already confirmed more than 8 new exoplanets while suggesting at least 300 more!

While scientists seek Earth-like planets in hopes of discovering extraterrestrial life, TESS is giving them glimpses into the bizarre and the exotic, including planets with ten times the mass of Jupiter that circle stars in eccentric, elliptical orbits. Move over, James Kirk and Spock! TESS is already exploring strange new worlds and boldly going where no one has gone before.