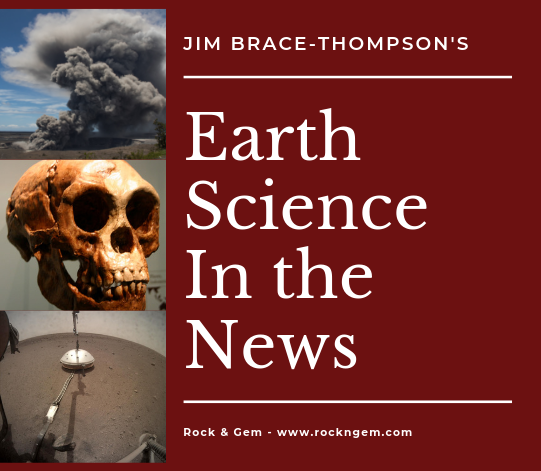 Living in the Aftermath of Historic Eruptions

Last year saw eruptions of historic proportions on Hawaii’s Big Island as the Kilauea volcano let loose. At times, it became a daily feature in newspapers and nightly news casts as 700 homes were lost and entire communities were evacuated over a four month period due to advancing lava flows, flying rocks, and toxic gases.

It’s reported that an area half the size of Manhattan was buried beneath tens of feet of lava, and that a square mile of new land was added to the island as lava hit the sea.

A recent Associated Press news report by Caleb Jones vividly documents the difficulties residences face in attempting to return to life on the slopes of an active volcano. For many, there is no place to return to, just black fields of hardened lava. For some whose homes were spared, access has been cut off by flows that took out roads. For others, toxic gases still spew from vents and cracks, blow in the wind, and accumulate in basins, making return impossible.

Still, the allure of Hawaii remains, along with the resiliency of the human spirit. As Jones reports, one couple whose home was spared put it bluntly: “Our plans are to stay.”

In 2004, the world of human paleontologyFossils of the Florida Plateau was rocked by a little critter with the scientific name of Homo floresiensis and the informal name of “the hobbit”. Found on the Indonesian island of Flores and dated at between 50,000 and 190,000 years old, such a new species of humans was completely unexpected—and fiercely debated. A human relative just three-and-a-half feet tall with a small brain, weak chin, and shoulder, arm and wrist bones more chimp-like than human? “Say it ain’t so, Joe!” shouted some scientists who had difficulty accepting this strange being as a second-cousin-once-removed.

Well, those doubters get to shout all over again…A paper published in the journal Nature in April introduced yet another strange new member of the human family: Homo luzonensis, named for the Philippine island of Luzon where it was found. Dated at 50,000 to 80,000 years old, these fossils show another rather diminutive critter, one with curved finger and toe bones suggestive of a life lived in trees as well as on land.

That both H. floresiensis and H. luzonensis would have evolved small body sizes compared to other humans of the time is not all that startling given that both inhabited islands and thereby developed in isolation from other human populations. There is an evolutionary phenomenon called “insular dwarfism” whereby creatures confined to islands tend toward small body sizes to adapt to limited resources.

We see it on the Channel Islands off the coast of my own home of Ventura, California, where “pygmy mammoths” (Mammuthus exilis) from the Ice Ages have been unearthed. These stood just 5.6-feet tall at the shoulder compared to 14-foot-tall Columbian mammoths on the mainland. Some are now speculating that the human tree may have tried all sorts of experiments on islands around Southeast Asia. And that we shouldn’t be surprised should more “hobbits” be in the cards!

Mars Does Indeed Shake and Quake!

Earthquakes occur many times daily on our dynamic planet Earth thanks largely to plate tectonics that keep our continents constantly on the move. But are there “mars quakes?” That’s been an open question because Mars would seem to lack plate tectonic processes. Still, other things can cause quakes, from meteorite impacts, to cracking caused by crustal cooling and contraction, to the pressure of magma welling up from below, or freezing and thawing of large patches of underground ice.

To search for mars quakes, a year ago the U.S., Germany, and France launched InSight

(“Interior Exploration using Seismic Investigations, Geodesy and Heat Transport”). The InSight lander settled successfully on Mars last November. Among the instruments on board: a super-sensitive seismometer.

People more concerned about Earthly problems may complain about wasteful government spending on super-expensive and risky space probes (price tag for InSight: $816 million), but in this case it seems the spending has paid off. On April 6, the InSight seismometer detected the first ever verifiable mars quake.

No reports of alien panic among a green population nor of Martian canals splashing over their banks; in fact, the quake was reportedly quite small. Still, it showed Mars may indeed be seismically active. Scientists hope stronger quakes will help paint a picture of the martian interior, thus teaching us not just about Mars but also about how other rocky planets, like Earth and Venus, formed and evolved and why they are each so different today.

Earth Science In the News: A Hum Foretells a New Volcano?