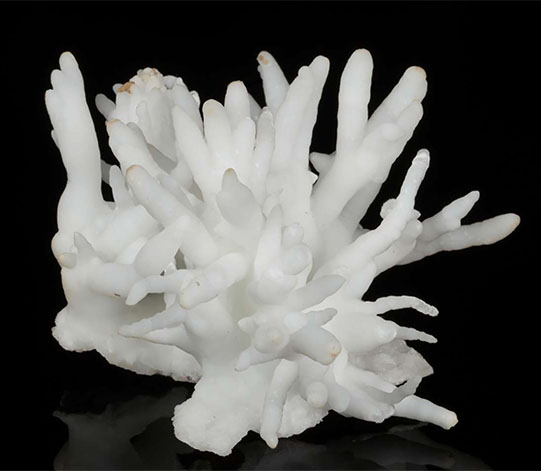 Aragonite was named for Aragon, Spain, where it was first discovered, but it’s a common mineral that is found worldwide.

Aragonite is a polymorph of calcite (calcium carbonate). That is, it shares the same chemical composition (CaCO3), but because of different conditions during crystal formation, its crystal structure and characteristics differ slightly. Aragonite tends to be unstable and if heated above 725°F, it will change to calcite. At Mohs 3.5-4, it’s a little harder than calcite (Mohs hardness 3), but both are relatively soft carbonate minerals.

“Classic” aragonite grows in elongated, prismatic, orthorhombic crystals that often form in twinned clusters, as compared to calcite, which often grows as pointed trigonal crystals. However, aragonite grows in varied forms: It may be found as fibrous masses, as coral-like structures, or as banded stalactites. It also varies in color. While often white, it may be colorless, yellowish, reddish, greenish, purplish, bluish, or gray depending on other minerals that formed alongside it.

Whatever its exterior color, it leaves a white streak and usually has a vitreous to dull luster. Like its close cousin calcite, it will fizz in hydrochloric acid. It also often fluoresces a bright pink under ultraviolet light.

Aragonite is a common mineral that crystalizes in low-temperature solutions, especially in sedimentary rocks. For instance, it may form in veins and caves in limestone areas and around hot springs. It’s often found as stalactites and coral-like shapes in cave deposits, and marine creatures such as clams and corals secrete shells or skeletons composed of aragonite that later change into calcite during fossilization.