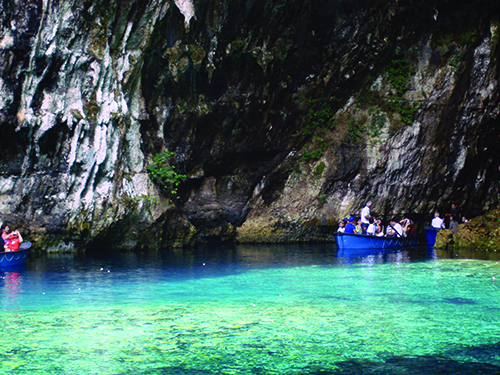 My visits to the Greek island of Kefalonia and the subterranean Lake Melissani inspired my recent gem carving I’ve titled “Nymph Melissanthi.” The gem is carved as a cameo in chalcedony with bright blue-green chrysocolla veins, and a beautiful flower-like dendritic inclusion, which I positioned at the nymph’s lips. The gem material is from Arizona and was chosen to reflect the lake’s colors.

The island of Kefalonia (also spelled Cephalonia) is located off the west coast of Greece. It is part of the Ionian Islands, renowned for rich fauna, soaring mountains that reach down to the sea, vineyards, olive groves, and beautiful idyllic beaches. 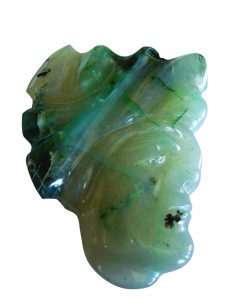 Researching the source of my inspiration, as I typically do for each piece, I read about the ancient tragic love story - the legend of the nymph Melissanthi. The name Melissanthi, or Melissani, originates from the Greek words for meli=honey and anthos=flower. According to the ancient Greek myth, nymph Melissanthi loved the god Pan, but because he did not reciprocate her love, she was overcome with sorrow and fell into Lake Melissani and drowned. What a romantic and tragic story. A young beautiful nymph falls in love with a god, known for his excessive and lustful behavior.

Pan was the chief god of pastures, forests, and flocks. He is often represented with the head and body of a man, a beard, horns on his forehead and hoofs like a goat. He was supposed to inspire irrational behavior and sudden fright, hence the word ‘panic’. Nymphs were beautiful young female deities, goddesses of nature, associated with water, fauna, fertility, and earth’s cornucopia.

The subterranean lake, also known as Cave of The Nymphs, is located in the village of Karavomylos, a little over a mile from the major port of Sami, about an hour’s drive from Argostoli, the capital of Kefalonia. The area is surrounded by trees and forests, which was the perfect place for god Pan’s reign. The cave and underground lake was discovered in 1951 by speleologist Giannis Petrocheilos and is considered one of the island’s geological phenomena.

Although that legend may only be a fairy-tale, on an islet within the lake site, in the early 1960s, archeologist Spyros Marinatos and his team discovered the ancient sanctuary of Pan. This discovery proved that the cave was a real place of worship, a cult place dedicated to the god Pan and the Nymphs. 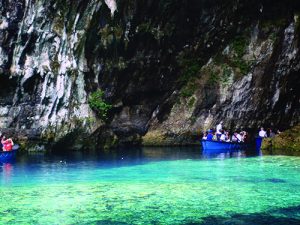 and gaze at the attractive formations of stalactites hanging from the cave’s ceiling. The ceiling of one of the two chambers collapsed thousands of years ago, leaving a large opening where the sunlight filters in and hits the water of the underground Lake Melissani. It is almost magical in the middle of the day when the sun is directly overhead and its rays hit the turquoise water. As the boats glide across the crystal-clear water, you can almost visualize the tragic scene of nymph Mellisanthi standing on a rock and falling into the water. I can understand how this enchanting site became a place of worship.

In the town of Argostoli, the Archaeological Museum (which, unfortunately, is closed until further notice due to earthquake damage in 2015) contains fabulous collections of ancient pottery, sculptures, jewelry, and coins. In one case are the findings from the sanctuary of Pan from Lake Melissani, dating from the 3rd and 4th centuries BCE. They include a small ceramic (clay) statuette of the god Pan, featuring the seated god with legs of a goat, holding a wine chalice. Another wonderful find from that sanctuary is a round clay plate with six nymphs dancing in a circle around Pan. Another clay tablet depicts a procession of three nymphs, while a broken ceramic plate with an embossed female head possibly depicts a nymph.

Another of my carved gems, “Pan — the God of Pastures,” is also inspired by ancient Greek mythology. The gem is carved in lapis lazuli from Afghanistan and weighs 129.0 carats. It is set as a pendant enhancer in a hand-fabricated 14K gold setting, detachable from a strand of 14mm round lapis beads. The two pieces are now forever linked through the legend of Nymph Melissanthi and Pan.

In this new monthly column, which we are calling “The Road Report, I will be sharing stories about places I visited, experiences I’ve had, and inspiring moments and influence involving people, history, and legends. Hope you will all enjoy it!

Helen Serras-Herman, a 2003 National Lapidary Hall of Fame inductee, is an acclaimed gem sculptor with over 37 years of experience in unique gem sculpture and jewelry art. See her work at www.gemartcenter.com and her business Facebook page at Gem Art Center/Helen Serras-Herman

On the Rocks: Persevering During Trying Times