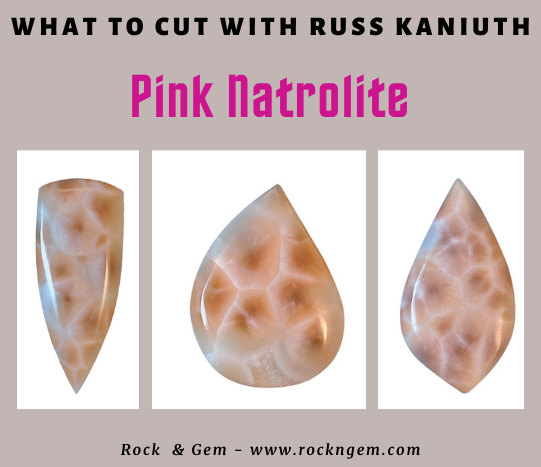 Over the past year, we haven’t seen many new materials surface in the lapidary marketplace. However, one did appear and stood out amongst the others. Early on, there were several conflicts as to the name and identification of this material. I heard it called thomsonite and pink larimar, but it turned out to be natrolite after it was thoroughly tested.

This particular variation of natrolite comes from Indonesia, where it’s being mined as seam material. It’s botryoidal on one side, attaching to its basalt host stone, and has radial crystals tinted by iron, giving it that pink larimar appearance on the opposite side. Larimar has been an exceedingly popular material for quite some time now. So, as a new type of stone with an equivalent appearance with a pink-rose color, natrolite enjoyed great popularity in a hurry.

Pink natrolite is easily found. It was sold at the Quartzite and Tucson shows this year and can also be found online via eBay and Facebook. Most of this material is smaller-sized pieces under a couple of inches in either direction and relatively soft, about 4.5 on the Mohs scale. The one thing to look for when shopping for this material other than the pattern is its thickness. Always look at both sides and make mental notes of whether or not there will be enough material for a cab after the botryoidal backside has been sanded down flat.

"Larimar has been an exceedingly popular material for quite some time now. So, as a new type of stone with an equivalent appearance with a pink-rose color, natrolite enjoyed great popularity in a hurry."

Since this is a seam material, you won’t have to do any slab cutting. Instead, you’ll have to trim out your preforms and then sand the backside. This material comes quite often in curled pieces, not always flat, so you’ll have to make adjustments as to how to trim each preform so that you can get a flat-backed cab.

Once you have your preforms cut out and are ready to cab, natrolite is fairly easy to cab. Though it looks like larimar, it’s much softer and doesn’t break apart as larimar does. So, start on an 80 grit steel wheel to shape your cabs. Go lightly at first, get a feel for the hardness of the material, and then start doming your cab. Many people like to use 220 “steel” wheels in their setup, but I like to use 140 soft resin diamond wheels before moving on to the 280 grit. It quickly removes deep scratches and takes much of the hard work away so that by the time you are ready to move on to the 280, the majority of your work is already done. At the 280 grit stage, this is where you need to make sure all the scratches are completely gone before moving on. With this material, it can be very difficult to see scratches due to the white coloring and radial crystal patterns, so it’s best to have a good light source in your shop and to dry off the cab thoroughly to see if the surface is scratch-free.

By the time you finish the 600 grit stage, you’ll notice a nice polish already appearing; it doesn’t take much to get a brilliant mirror polish on natrolite. Continue to the 1200 and up to 14k grit. From here, you shouldn’t have to go any further, and this should yield a beautifully polished cab.

The owner of Sunset Ridge Lapidary Arts and the founder and operator of the Cabs and Slabs Facebook group. See more of his work at https://www.facebook.com/SunsetRidgeLapidaryArts. 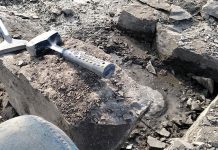