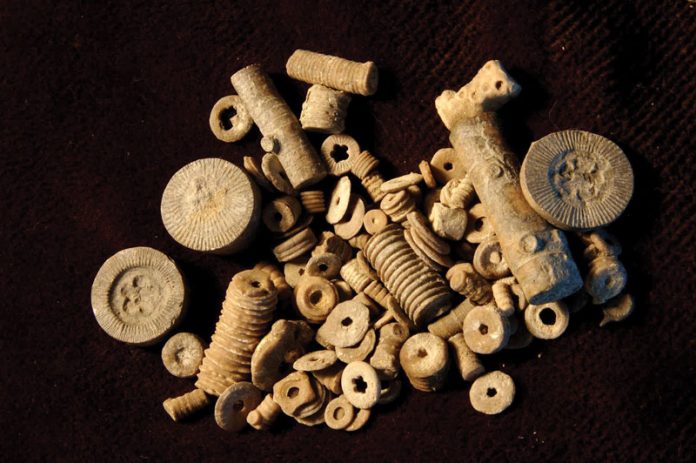 What are crinoids? These marine creatures lived and thrived in ancient saltwater oceans millions of years ago. Early primitive examples lived in the shallow seas and lagoons close to shore where they would filter the water to feed on bits of material and plankton. Today, crinoids can still be found, in the deep oceans where they continue to filter water for their food.

Crinoids are often called “Sea Lilies” or “Lilies of the Seas” because of their appearance; however, they are animals. They are relatives of the extinct cystoid. Crinoids are members of a group of animals called echinoderms which include starfish, sea urchins, and brittle stars. Their name comes from the ancient Greek, Krinon which means a lily. The appearance of the stalked animals does resemble a flower.

Crinoids have a five-sided pentaradial symmetry. In some species, they have arms in multiples of five and still retain symmetry. They have exoskeleton ossicles (bony plates) comprised mainly of calcium carbonate. It is because of this calcium carbonate that they became fossilized in the ancient sea. In certain deposits, they can be some of the most abundant fossils, especially the disks. Crinoids are made up of distinct body parts that include the holdfast, stalk, calyx, and arms.

The holdfast is a complex system of body segments that allows crinoids to attach themselves to the ocean floor, rocks, and other hard substrates. In some cases, they attach to other animals such as bryozoans, corals, and even other crinoids. Some crinoids can release their grip and float in the water column until they find a more advantageous feeding area. This is essential for survival. 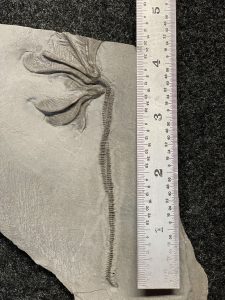 The stalk, sometimes erroneously called a stem, is made of many, single-round calcium carbonate disk-shaped segments or plates. Stacked atop one another, they form a long column. These disks are porous and held together by ligament-like structures. These structures quickly decayed when ancient creatures died. The stalk is hollow with a central canal passing from the calyx to the holdfast. The column can be round, square, five-sided, oval, or star-shaped. The internal cavity of the disks is also marked by a wide variety of sizes and shapes of holes.

The calyx or aboral cup is the main body of the crinoid. It contains most of the vital, simple organs of the creature. This is where the mouth and anus are located. The calyx is made up of irregular calcareous polygonal ossicles (bony plates) that lock together to form a general round, pentangular or oval shape.

Attached to the calyx are the brachiols or arms with feeding structures called pinnules. Located on the pinnules are small mucous-covered tube feet. The tiny pinnules on the arms sieve the water capturing microscopic particles. The tube feet capture the particles. Then they pass the particles to the center of the pinnules that have a ciliated grove called the ambulacral groove. The cilia, small hair-like structures, in turn, pass it down the groove to the mouth located near the center of the calyx. All the grooves converge on the mouth where the food enters the digestive system. The anus discharges waste matter sometimes through an anal tube that extends beyond the arms discharging material into the water.

These are the basic body parts of a crinoid. Paleontologists have named and described hundreds of different species of ancient crinoids. 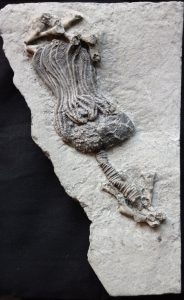 In our prehistoric past, crinoids lived and thrived in shallow saltwater environments close to shore where food sources were abundant. Being close to the equator, these areas were prone to terrible storms and hurricanes. Much like today, these storms would ravage the shallow seas and lagoons disturbing the fragile ecosystem and destroying many creatures in the sea.

Crinoids would be ripped from their holdfasts and be torn apart strewing the ocean floor with their remains. Torrents of rain and floods, plus the retreating storm surge, would pick up dirt, mud, sand, and other sediments and wash them into the sea. Vast areas of mud and silt would cover the seafloor smothering life and burying the remains of these creatures. Rarely were crinoids preserved in their entirety.

Occasionally the storms were not as severe. Crinoids would be ripped from the seafloor and remain generally intact. Storm surges would still impact the land and bring a slurry of fine mud into the sea. They would be covered by soft mud retaining their structure and becoming excellently preserved. These are some of the rarest fossils and are the reason we know so much about crinoids.

Bringing Fossilized Crinoids Back to Their Glory

Even when well-preserved specimens are found, they still must be professionally prepared using air abrasive technology.

The process of air abrasion is painstaking to expose such delicate structures. The air abrasive unit simply consists of a pressurized air source, a prep box, a dust evacuation system, a magnification source, abrasive powders and an air abrasive tool -a mini-sandblaster.

Air is pushed through a hose at pressure picking up the abrasive material from a reservoir. It is then passed through the nozzle of the tool and the excess matrix is blasted away. Care must be taken around the fossil so as to not destroy or abrade it away. It takes much practice, and more than a few mistakes to master the process, but the results can be outstanding.

Make Your Own Jurassic Forest

Make Your Own Jurassic Forest