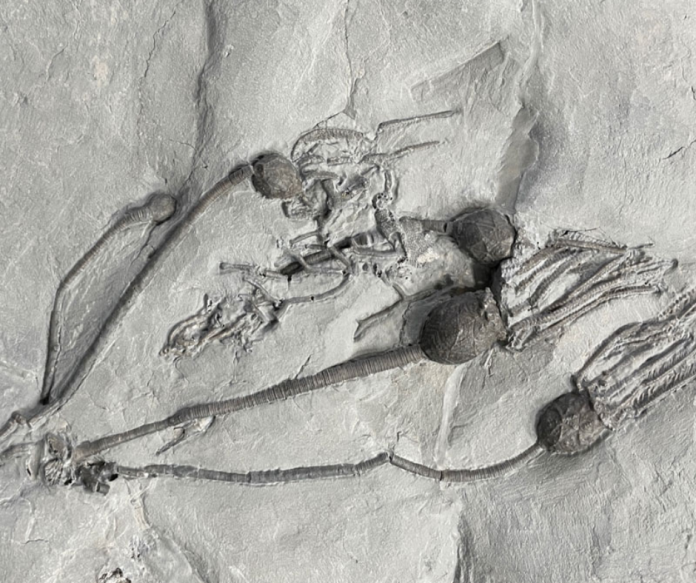 Cystoids and crinoids are cousins that look alike but have distinct differences. Cystoids occupied an ecological niche along with the crinoids. Unfortunately, cystoids did not survive to present-day oceans as crinoids did. Find out more about these curious cousins.

Cystoids were another form of marine creature related to modern-day starfish. They belonged to a phylum called Echinodermata that includes crinoids as well as starfish, brittle stars, sand dollars, sea cucumbers and sea urchins.

The main difference lies in the body of the creature. Cystoids have a somewhat spherical or oval body shape called a theca. Crinoids have a cup-shaped appearance called a calyx. Also, the arms of the crinoids are more “feathery” in appearance whereas the cystoids are more “stick-like” with smaller feathery structures called pinnules.

Cystoids lived their lives attached to the bottom of the ocean through a holdfast — an extension at the bottom of the stem-like structure that would wrap around an undersea structure like a coral reef or bryozoan colony. In many cases, the Caryocrinites ornatus cystoids of the Silurian Period are found attached to such bryozoan colonies. These were animals, though they may resemble plants.

Cystoid means “sac-like” referring to the bulbous theca. The theca is the main body and sits atop a column of round disk-shaped segments. The theca is made up of geometric ossicles or plates and it contains all the internal organs as well as the mouth and anus.

Attached to the theca, the brachials or arms can be found. In some exquisitely preserved specimens, the food-capturing structures called pinnules are found well preserved. The pinnules were covered with small tube feet that would capture food particles in the water. Their food consisted of plankton, detritus and organic matter.

The particles would be conveyed toward the mouth and passed inside. This process was repeated over and over as food particles contacted the tube feet. The primitive digestive system would process these and then waste matter would be ejected through the anus located not very far from the mouth. 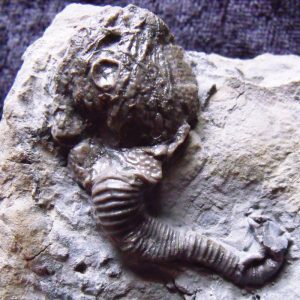 Because of the creature’s hard calcareous external skeleton, fossilization and preservation reveal great detail. In the Massie Shale around Napoleon, Indiana, they are generally found without stems and arms. In the Rochester Shale formation around Middleport, New York, they are found in fewer numbers, but nearly all are found complete or partially complete with stems, arms and even the holdfast attached.

Cystoids commonly inhabited the shallow saltwater seas that once covered parts of New York, Ohio, Indiana, Kentucky, Michigan, and other mid-western states. This area was further south than it is today.

Because of geological forces such as plate tectonics, these areas moved from near the equator to their present location. Being near the equator many millions of years ago, the warm tropical seas were subjected to periodic storms.

The deposits of the Massie Shale in Napoleon, Indiana, tell of these massive violent and destructive storms, as the cystoids found here are devoid of any arms or stems.

The main bodies are still complete, but the rest of the creatures are disarticulated. There are at least four different species of cystoids found there.

The Silurian fossil deposits of the Rochester Shale in Middleport, New York, provide evidence of less violent storms. Cystoids were ripped from the ocean substrate in many cases taking the bryozoan colonies with them. It seems that the storm surge just “bowled them over” knocking them down and burying them quickly. They were subsequently buried in a slurry of fine mud, sand, clay and other sediments. The soft, fine-grained mud allowed for exceptional preservation, in some cases down to the minutest of details.