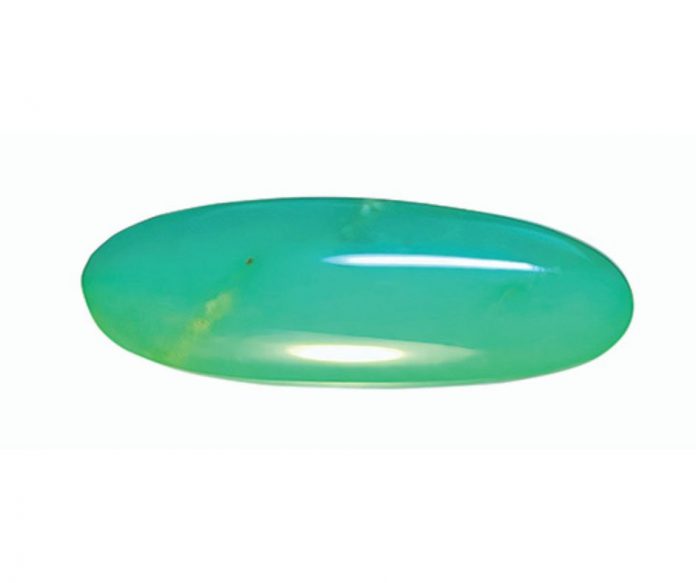 Chrysoprase is the outstandingly beautiful apple green stone that really makes heads turn. Chrysoprase is a chalcedony mixed with nickel, which gives it that gorgeous gemmy green color. It’s believed to be one of the oldest semiprecious gemstones highly prized by many, including the Romans, Greeks, and Egyptians. It was also very popular in the Victorian period when it was used as cameos and cabochons.

There’s also a legendary tale about Alexander the Great, who believed he gained tremendous wisdom from this stone, and as such, wore it on his belt into each battle. That was until one day while crossing a river, he was struck by a snake, which caused the stone to be knocked off his belt and fall into the river. Unable to find and recover the stone, according to the tale, he never won another battle.

Where to Find Chrysoprase

Chrysoprase is found in several places on earth, including Germany, the United States, and Madagascar. However, the most known locality in modern times is the Marlborough region in Queensland, Australia. This stone is getting a bit scarce to find in higher grade material in larger size pieces, and pricing reflects that in the marketplace. Grading is also something to carefully consider when buying this material. High-grade specimens will be a solid color with no blemishes or inclusions and are highly sought after, so expect a much higher price when shopping for rough or slabs that fall into this category. There are other colors of chrysoprase, such as citron/lemon, and a pale variation from Indonesia.

When buying rough, it can be tricky to find large enough seams that don’t curl up in many areas (like a potato chip). This condition makes it a challenge to slab, so be prepared to hunt through substantial pieces to find a few that will yield a large enough area in the slab to cut cabochons. Sometimes you might end up buying thin seams and have to grind the top and bottom portions to gain enough space to cab. Since chrysoprase is an exceedingly hard material, ranking at a 6.5 to 7 on the Moh’s scale, it is best to hold off proceeding until you have changed your blades and wheels. I can’t express how valuable a fresh set of wheels are when working on this material.

Grading is also something to carefully consider when buying this material. High-grade specimens will be a solid color with no blemishes or inclusions and are highly sought after.

When cabbing chrysoprase, a traditional six-wheel set up will work just fine, but if you can swap around the wheels, I highly suggest starting on an 80 grit steel wheel, then smooth it out on a 60 grit soft resin wheel. This approach will reduce the time and effort it usually takes when working on a chalcedony that is this hard. After smoothing out the edges and doming the cab, I like to move onto a 140 grit soft resin wheel, which removes all the deep scratches and makes it easier to finish on the 280 grit wheel and progress forward. While working the cab on the 280 soft resin wheel, you can continue to check for any existing scratches. It would be best if you did not move forward at this point until the scratches are gone. 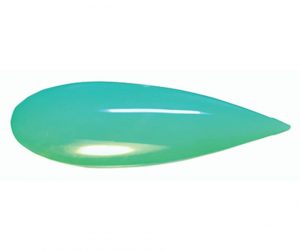 One helpful trick to use at this point is to quickly run the cab over the 1200 grit wheel and then dry the cab completely. Being a solid color stone, if any scratches still exist, they will immediately show themselves by using the 1200 wheel. Once all the scratches are gone, and you can move forward, run the course like any other agate you cab and finish on a 14,000 grit soft resin wheel, or 50k if you have it.

At this point in the process, your chrysoprase cab should render a brilliant glossy finish. You can use a small amount of cerium oxide on a leather buffing wheel to obtain a more mirror finish, but be cautious not to heat the cab in the process, as it may fracture from the heat generated.

Sometimes, leaving well enough alone is the best thing to do.

This What to Cut column about chrysoprase previously appeared in Rock & Gem magazine. Click here to subscribe! Story and photos by Russ Kaniuth.