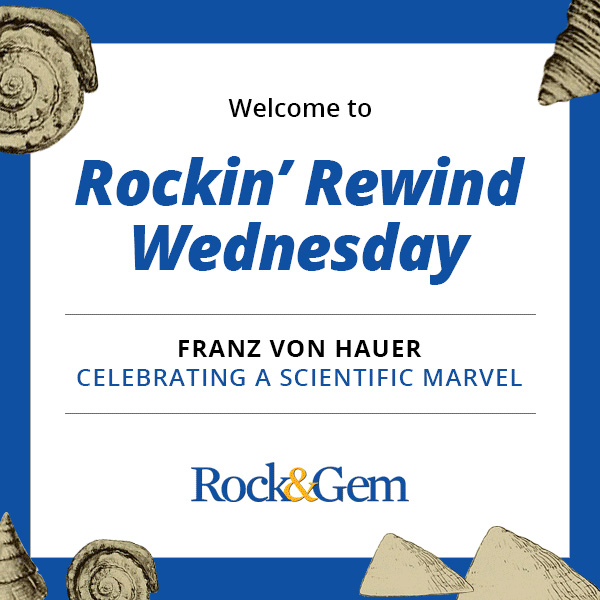 I’m guessing like most new parents, their primary hopes for their young son was good health and that he would go on to live a happy, productive, and long life. I wonder if they had an inkling that his birth on Jan. 30, 1822, would lead to a life of history-making mapping efforts and essential geological discovery and recording? Simply put, he advanced multiple sciences.

It’s a legacy of which to be proud, certainly. Von Hauer spent a majority of his life studying, working in, and promoting appreciation for the field of geology and paleontology. He worked in the mining industry in the Austrian state of Styria, before spending more than 40 years working in the mineralogical museum in Vienna, ultimately overseeing what is now the Natural History Museum Vienna, and serving as the director of the Geological Survey in Vienna.

In addition to his role as advocate and administrator of mineralogical and geological institutions in Vienna, von Hauer spent considerable time researching fossils of the Cephalopoda species (squids, octopuses, nautilus, and ammonites). According to information published by the University of California Museum of Paleontology (UCMP), there are around 17,000 identified species of fossil cephalopods. Von Hauer’s work focused on the fossil species of the Triassic (200 million years ago) period in his region of the world. Fascinating to think that the work of von Hauer and his peers in 19th century Austria likely influenced the research that continues to be done by teams like that of UCMP.

While the bounty of von Hauer’s cited accomplishments is impressive, there is one additional, and significant, piece of work to mention. In 1865, the product of his research and work was published as the “Geological Map of Austrian-Hungry with Bosnia and Montengergro.” This is considered to be one of, if not the first, loess map of Central Europe. Between 1865 and 1884 four editions of the map and its supporting documentation were published, according to ScienceDirect.com. His participation and research with fellow scientists and geologists also led to several articles published by the Geological Survey.

What is Loess? According to National Geographic, loess is fine, mineral-rich sediment created by the wind and by glaciers. Deposits of loess are primarily found in northern China, the Great Plains of North America, parts of Russia and Kazakhstan, and of course, Central Europe, as documented by von Hauser.

In 1882 von Hauer was awarded the Wollastone Medal. It is considered the highest-ranking award given by the Geological Society of London. According to Geolsoc.org.uk, the medal is awarded “to geoscientists who have had a significant influence by means of a substantial body of excellent research in either or both ‘pure’ and ‘applied’ aspects of the science.”

Later in life he would serve in the house of the Austrian Parliament, before dying just before the turn of the 20th century. He was 77.

As I said, I wonder if von Hauer’s parents had an idea of the type of life he would go on to lead and the many aspects of his work that would inspire generations of geologists and influence the study and appreciation of geology for years to come? Perhaps they did, or perhaps they were simply in awe of their child. Regardless, it seems to me, the legacy of Franz Ritter von Hauer is an example of the phrase most often attributed to Sir Isaac Newton…

“If I have seen further, it is by standing upon the shoulders of giants.”

It leads me to consider the type of legacy I hope to leave.

Designing a Cab for a Pendant