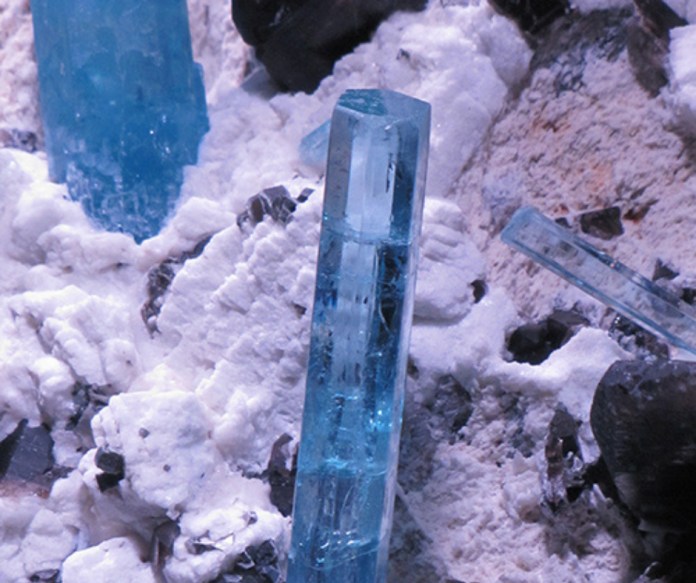 Beryl colors are varied and include aquamarine, morganite and heliodor, despite their different, respective blue, pink and golden-yellow colors.

Beryl, or beryllium aluminum silicate, is a cyclosilicate (ring silicate) that crystallizes in the hexagonal system, usually as six-sided, short-to-long prisms with distinctive flat or modified-flat terminations. Strong atomic bonding provides beryl with a substantial Mohs hardness of 7.5-8.0, which suits it well for gem uses.

Beryl is an allochromatic, or “other-colored”, mineral in which the presence (or absence) of traces of chromophoric (color-causing) elements create seven distinct color varieties. Numerous channels within beryl’s ring-type, sheet structure accommodate these chromophores, which include divalent and trivalent ions of iron and manganese, and trivalent ions of chromium and vanadium. Ions of these divalent chromophores partially replace beryl’s divalent beryllium ions, while trivalent chromophores partially replace its trivalent aluminum ions. These replacements alter the light-reflecting properties of the crystal lattice to produce beryl’s wide range of colors.

Goshenite is beryl’s colorless variety. Lacking a distinctive color, goshenite is rarely used as a gemstone today, although it was once a popular substitute for diamond. Goshenite is believed to contain elemental impurities that inhibit the color-producing effects of accessory chromophores.

Green, But Not an Emerald Connection

Emerald usually occurs only as small crystals and tends to be heavily flawed, with cracks and inclusions that compromise both its transparency and its structural integrity. Nearly flawless emeralds are rare; “clean” stones with deep color and minimal flawing are extremely valuable.

Green beryl is a pale-green variety that gemologists do not equate with emerald. Its pale color is caused by divalent iron (ferrous) ions and trivalent iron (ferric) ions partially replacing beryl’s beryllium ions and aluminum ions. Because of its pale, often “muddied” color, green beryl has never been a popular gemstone.

The most popular of the beryl gems is aquamarine. Its name stems from the Latin aqua marina, literally meaning “seawater” and referring to its blue color, which is created when divalent iron ions partially replace beryllium ions. Aquamarine typically has water-clear transparency; it is also relatively abundant and occurs in large crystals that can be faceted into gems of 10 carats or larger. Aquamarine’s gem value is based not on size, but on the intensity and purity of its blue color, degree of transparency, and lack of inclusions.

Morganite is the pink variety of beryl. Its soft colors, ranging from pink to purplish-pink and orange-pink, are due to divalent manganese ions that partially replace beryllium ions. Morganite was named for American financier and noted gem collector J. Pierpont Morgan (1837-1913) at the suggestion of America’s first gemologist, George Frederick Kunz (1856-1932). Morganite gems have excellent transparency. Because large crystals are fairly common, morganite is often cut into gems that are 5 carats or larger.

Heliodor, beryl’s golden-yellow variety, can also be lemon yellow to brownish-yellow and greenish-yellow. The word “heliodor” stems from the Greek words helios, or “sun”, and doron, or “gift." Its literal meaning, “gift of the sun" refers to its warm colors, which are created when trivalent iron ions replace aluminum ions.

Red beryl is the rarest of beryl’s color varieties. Its saturated red color with hints of orange or purple is created when trivalent manganese ions partially replace aluminum ions. Like emerald, red beryl is heavily included and subtransparent and occurs only in small crystals.

Whether the gem is the green emerald, blue aquamarine, pink morganite, or golden-yellow heliodor, it owes its distinctive color to beryl’s ability to accommodate accessory chromophoric ions of chromium, vanadium, iron and manganese.

Agate Appreciation On The Rise

Glauberite: It’s Not Always What It Seems