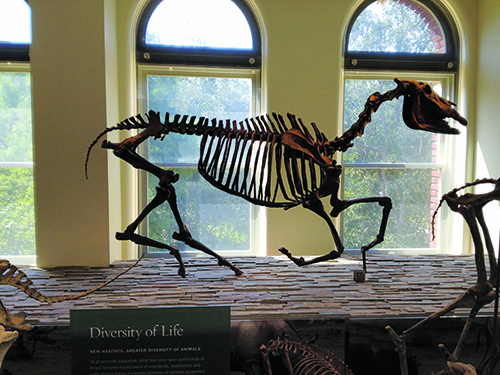 Idaho’s nickname is “The Gem State” for its abundance of mineral wealth and scenic beauty, and in 1967 it designated a truly wonderful State Gem: the Idaho star garnet, a plum-purple variety of almandine.

Needlelike inclusions of rutile produce the optical star effect in stones that have been cut and polished as high-domed cabochons. Star garnets are rare—rarer even than star rubies or sapphires—and those from Idaho have been rated the world’s best.

Although four-rayed star garnets have been reported from Idaho, India, Russia, Brazil, and North Carolina, only in Idaho have elusive six-rayed star garnets been found as well. I purchased both four and six-rayed cabs from Stewart’s Gem Shop in Boise, a family business specializing in Idaho star garnets since 1945. Formed in mica schists, these garnets erode out and end up concentrated in river gravel. The most famous locality is Emerald Creek in Benewah County.

Idaho is known as horse country and boasts wild herds. Horses disappeared from North America 10,000 years ago, and these modern horses were brought here by Europeans, but their ancestors roamed our continent for tens of millions of years.

Fossil Horses At the Museum

The earliest member of the modern genus Equus (horses, donkeys, and zebras) was Equus simplicidens. Similar in structure and stature to African zebras, Equus simplicidens is sometimes call “the American zebra”. Dating from the early Pliocene Epoch (3.5 million years old), it ranged from Idaho, through Nebraska, Texas, and as far southeast as Florida, but it was Idaho that put it on the map. Along the Snake River near the town of Hagerman, one of the world’s best Pliocene fossil sites was excavated in the 1920s and ’30s.

Hundreds of fossil horses were shipped to the Smithsonian and museums around the world, and Equus simplicidens became popularly known as the Hagerman horse. It lived on grassy plains alongside mastodons and saber-tooth cats. It’s speculated an entire herd drowned while trying to cross a flooded river, resulting in the dense fossil deposit near Hagerman. When erosion and pilfering threatened the locality, Idaho citizens led a move to have the site preserved. In 1988, it became the Hagerman Fossil Beds National Monument, and the Hagerman horse was declared the State Fossil.