It’s not uncommon for people to come away from a gem and mineral show feeling inspired, amazed, impressed, and often with less money than when they entered. And sometimes they leave the show dreaming about a delicious feast, thanks to the rocks they saw.

If your response to that last sentence is something along the lines of “wait, what?” understandably, you may have that reaction, you are not alone in feeling confused, and yes, a delicious feast is correct. It’s all thanks to the Rock Food Table, a cherished traveling exhibit, owned and managed by the East Texas Gem & Mineral Society (https://www.etgms.org)

Although several events have been canceled or postponed this year in response to the COVID-19 pandemic, as of the posting of this article, the Rock Food Table will be hitting the road to make an appearance in Baton Rouge, Louisiana. The table will be an exhibit at the Baton Rouge Gem & Mineral Society’s Annual Gem & Mineral Show, set for Aug. 8-9.

Indeed, this is not the only rock food display, but it is among the earliest, most 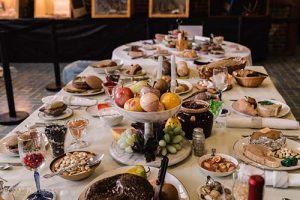 extensive, and most viewed, as it is a traveling exhibit available for clubs within the continental U.S. to book for display. This is also not the first time the Baton Rouge club hosted the Rock Food Table during its show, but it has been a while, and it is a welcome return, explains Wanda Gawarecki, show coordinator for the club.

“We had the Rock Food Table at our show in 2012/2013 when the original owners (Bill and Lois Pattillo) had it. It has grown over the years, and the round tables have been added to space out the food so you can see breakfast, dinner, and desserts. It’s amazing!”

Amazing in many ways, specifically, how amazingly realistic each rock looks to be an item of food. To call the Rock Food Table, a labor of love is a fair assessment, considering the history and evolution of its care and growth over the years. As explained on the East Texas Gem & Mineral Society (ETGMS) website, the Table, affectionally known as RFT, was the idea of rockhounding couple, the Patillos, members of the Gulf Coast Gem and Mineral Society (http://www.gcgms.org), based in Corpus Christi. As the story goes, while attending the Portland, Oregon Gem and Mineral Show in 1982, the couple saw a unique exhibit of rocks that looked like pastries. While it was interesting, the spark of the idea didn’t occur until later.

After examining their rock collection and seeing many that would work nicely for such a display, Lois reached out to fellow club members asking if others would like to join her in creating a display of “rock food items,” for the club’s 1983 show. As is often the case with good ideas and opportunities, word spread quickly about the RFT, as club members from other Texas-based mineral clubs spotted the display in Corpus Christi. The requests to have the display at other clubs’ shows started coming in, and in no time, its popularity was undeniable.

Equally, and perhaps, even more impressive, is that most of the rocks of the RFT appear in their natural state. Some have been cut to show the interior or to present in the shape of the food item, and a few have been dyed to represent a specific item of food better.

The Pattillos owned and presented the RFT at shows for 20 years. Ultimately, however, the display became too much work after such a long time. After the absence of the RFT display at the East Texas Gem & Mineral Society’s annual show in 2014, rockhounds and dealers, Keith and Toni Harmon purchased the table. They proceeded to continue the tradition of the RFT until 2017 when the couple donated the table to ETGMS.

According to the ETGMS website, the table has appeared at more than 40 different show locations and put on more than 100,000 miles since the first show in 1983.

As Gawarecki explained, the display’s incredibly life-like presence is “something amazing to see, even if you don’t collect rocks.”

While the unusual circumstances of 2020 have been challenging for all, in terms of hosting any such public event, there are new safety protocols and measures to implement, as well as limits on crowd capacity. For the BRGMS, part of the club’s annual show structure lends itself better to meeting these requirements, Gawarecki said.

“Currently, we keep our show at 19 vendors. This allows everyone to shop, but not feel overwhelmed and for great spacing between vendors, which will be helpful this year with social distancing,” she said. “Louisiana is in Phase 2, and that allows for 50% occupancy. Based on the fire marshal, we will be able to have 500 people at a time in the show (which is housed in a 12,000 square foot building at the Lamar Dixon Expo Center).”

In addition to recommending people wear masks and placing hand sanitizer stations throughout the show floor, the club will have a member counting the number of visitors who come in and exit. The club also will not set up the fluorescent minerals area rock bed for children.