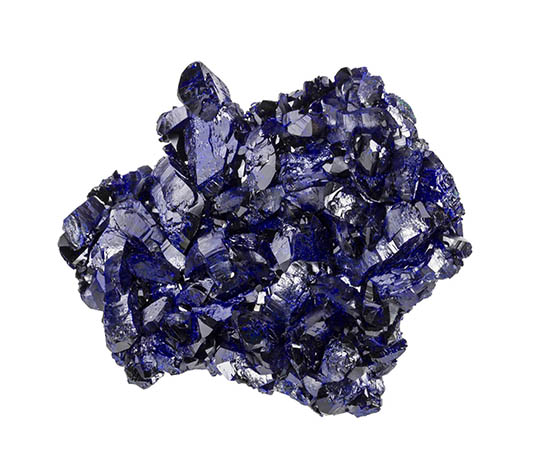 Oxygen is critical for life and vital in forming the secondary mineral species. More than half of mineral species have oxygen as part of their chemistry.

There was a time when our earth’s atmosphere had virtually no free oxygen. The dominant minerals at that time were sulfides. In the initial millions of years of Earth’s formation, our atmosphere was a reducing atmosphere, made up of hydrogen, helium, methane, ammonia, carbon dioxide, hydrogen sulfide, and other gases. There were some oxygen-containing compounds in Earth’s atmosphere and crust, but they were minimal, and there was almost no free oxygen available to form oxides. Then a dramatic change in the atmosphere occurred!

It is agreed that the earth grew in size by a process called “accretion”: the collision of space materials such as stony and iron-rich meteors and comets. Comets contributed frozen gases including carbon dioxide, oxygen and hydrogen. Scientists are still not completely in agreement on the composition of Earth’s earlier atmosphere, but they seem to concur that any oxygen present was locked in molecules of water, carbon dioxide, sulfur dioxide, and carbon monoxide, as well as quantities of methane, ammonia, and hydrogen sulfide.

That early reducing atmosphere, devoid of free oxygen, was not an atmosphere to encourage the development of life as we know it, nor did it allow oxide minerals to form. Any free oxygen arriving on Earth was immediately locked into molecular compounds, including iron oxide. In fact, the earth’s surface was undoubtedly rich in rust!

Billions of years ago, volcanic activity on Earth was immense. The noxious gases produced, which lacked free oxygen, joined an already dense reducing atmosphere, and this raised the surface temperatures of the earth. This created a climate that, through many mechanisms, encouraged the development and growth of simple, one-celled forms of life: bacteria.

Just how did this happen and what triggered their initial formation? Today, it's still being studied, but we know it happened. Did unusual volcanic action participate? Some scientists credit solar ultraviolet radiation for playing a role in bacterial appearance. Others suggest lightning provided the necessary energy to cause chemical changes. Be that as it may, among the earliest life forms to appear on earth about 3.5 billion years ago was a bacteria called cyanobacteria.

What is so important about this oddly named bacteria? We all know what bacteria are, basically single-celled forms of life we term as “simple”. Keep in mind that there is nothing simple about even a one-celled bacterium. Each living cell is far more complex than an inorganic mineral compound!

Cyanobacteria are very special, even unique, as they are key to the production of free atmospheric oxygen. These bacteria developed in warm, shallow waters, where solar energy was available, as was access to atmospheric ingredients. What makes cyanobacteria special is that they possess the ability to produce free oxygen through a process we are now very familiar with: photosynthesis.

This astounding oxygen-producing mechanism causes the bacteria to take on a blue-green color, hence the “cyano-” prefix. It produces oxygen by taking in nitrogen oxide and carbon dioxide from the atmosphere and, using solar energy, turning them into the proteins it needs for growth. In this marvelous process, it releases quantities of free oxygen into the atmosphere. Over eons of time, this changed our atmosphere from a reducing to an oxidizing atmosphere.

At first, this free oxygen was immediately combined into compounds like iron oxide—what we now call rust! The free oxygen also combined with methane in the atmosphere, producing compounds like water and carbon dioxide, which in later millennia contributed to the formation of limestone.

How do we know all this? One way is through the evidence in ancient rock formations that we are able to study. Some carbonate rock formations can be dated to hundreds of millions of years of age. Another proof is found in massive, layered formations of banded iron oxides, which we exhibit in museums and private lapidary collections. These are huge slabs of highly polished yellow, orange, red and black-banded rock. The colors are in a gorgeous swirling, curving pattern. These lovely banded minerals are from huge deposits of iron oxide that formed 3.5 billion years ago when free oxygen combined with available iron and are now mined in the United States, China, Australia and elsewhere.

Early cyanobacteria gradually evolved into even more productive large, complex colonies known as stromatolites. These ancient organisms, some of which still survive, produce huge quantities of oxygen for the atmosphere. You may not know it, but these same stromatolites created an exciting collecting site for today’s rockhounds! The large pockets of doubly terminated quartz crystals around Herkimer, New York, occur in cavities in a tough, gray dolostone with traces of a black organic material. Those quartz-rich cavities are all that is left of earlier-formed stromatolites buried by mud billions of years ago. The oxygen producers died, leaving traces of black organic material, and sometime later, solutions rich in silicon dioxide deposited the quartz crystals.

Eventually, as cyanobacteria and later complex organisms continued to release free oxygen, a point was reached where oxygen formed a significant part of the atmosphere. About 2.5 billion years ago, so much oxygen had been produced to cause dramatic changes on Earth. That change was so dramatic that scientists have given the time period several names: the Great Oxygen Event, the Oxygenation Catastrophe, the Oxygen Holocaust, and others. At one point, the amount of atmospheric oxygen reached 35%, before settling down to 21%.

There came a time when huge increases in carbon dioxide from volcanic activity and free oxygen were so great that animals and plants increased dramatically. The overabundance of plant life resulted in huge quantities of decaying plant matter. This vegetation was eventually converted to vast coal deposits, which is why we call the years between 359.2 million and 299 million years ago the Carboniferous Period.

With this sketchy background on the evolution of free oxygen in the atmosphere behind us, we can take a look at the role oxygen played in producing the mineral species we enjoy today.

Minerals are arranged into two general categories: primary and secondary. The primary minerals include native elements, but consist mostly of sulfides that occurred in the earth’s crust. They were later brought near the earth’s surface by hydrothermal solutions, which followed openings, or faults, in the crust. These metallic sulfides—all lacking oxygen—form the basis of our metal mining industry.

When sulfides are exposed to our atmosphere, they are immediately attacked by moisture and oxygen, a process called “chemical weathering”, and altered to form secondary minerals.

Water, by its very nature, always contains oxygen. That’s what keeps fish alive! The water and oxygen, as well as carbon dioxide, attack any exposed sulfides, breaking them down and releasing the metal ions to form secondary oxide, hydroxide, or carbon dioxide minerals.

Any metal-rich deposit—especially ones in which several different metal sulfides occur—where weathering has penetrated deeply into the earth can become host to a variety of fine secondary minerals. These sources include Tsumeb (Namibia), Bisbee (Arizona), Cornwall (England), and Mapimi (Mexico). Such deposits are known worldwide because of the quantities and variety of secondary species they produced.

Bisbee is known worldwide for its wonderful specimens of the copper carbonates azurite and malachite, the copper oxide cuprite, and a suite of nearly 300 other species. Even the native copper, though it lacks oxygen, is a secondary mineral, derived from the primary mineral chalcopyrite.

Cornwall’s mines are considered classics because of the variety of secondary species they produced. Instead of being rich in oxides and carbonates, Cornwall is rich in secondary arsenates, metal compounds that contain the arsenate ion AsO3-. These came from the decomposition of the primary ore arsenopyrite. When attacked by weathering, arsenopyrite forms wonderful, uncommon secondary species like liroconite, copper, aluminum arsenate, and chalcophyllite. Obviously, Cornwall’s superb, but rare, secondary species are derived from the weathering of primary sulfides.

Gem minerals like topaz, elbaite, emerald and ruby also have to have oxygen in their structures, but these minerals formed deep underground, away from the atmospheric effects of weathering.

They derived their oxygen from the hydrothermal water that deposited them in pockets, veins and cracks in the earth’s crust. And like all oxygen, theirs came from an earlier time in the earth’s development. Oxygen is a key element in the developing chemistry of a vast variety of gem minerals. The ancient “oxygen event” really did create a more colorful mineral world.

The Appeal of Secondary Minerals

Look in your own mineral collection. Which mineral specimens are your favorites? The bright-red rhombs of the manganese carbonate rhodochrosite, from Colorado? How about the lovely blue zinc carbonate smithsonite from the Kelly Mine, in New Mexico? These contrast nicely with reticulating twins of the snow-white lead carbonate cerussite, which come from many lead mines. Add to those the bright-yellow, needlelike crystals of the zinc arsenate legrandite, from Mina Ojuela, Mapimi, and you have a common suite of colorful secondary minerals that are rich in oxygen.

What would your mineral collection be like without secondary minerals? Minerals rich in oxides and carbonates are not only popular collector minerals, but dominate most mineral displays.

Clearly, we have much to be grateful for when we consider oxygen’s role in the formation of the minerals we cherish. Every mineral collection can boast a colorful and attractive selection of fine oxide and carbonate minerals because of the oxygen in their chemistry. And when you think about that, be sure to give thanks to those lowly, single-celled, oxygen-producing cyanobacteria.

This story about oxygen and our mineral world previously appeared in Rock & Gem magazine. Click here to subscribe! Story by Bob Jones.

Tap Into Your Inner Fossil Hunter